A Tantalizing Taste of Honduras

Home » News » A Tantalizing Taste of Honduras
Previous Next

A Tantalizing Taste of Honduras 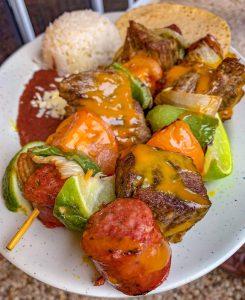 Situated in an inconspicuous center, Mi Bella Honduran Restaurant is a favorite of Houstonians craving a taste of home, as well as those looking for international cuisine in Spring Branch. For those of us accustomed to Mexican or Tex-Mex dishes, Honduran food is a definite change of pace. Come hungry, because this homestyle cooking is sure to leave you full and satisfied.

Glancing hungrily over the menu at Mi Bella means choosing between pollo frito, seafood soups, shrimp in coconut sauce, Honduran breakfast plates, and many other globally inspired foods that have made their way from Honduras to Houston. Honduran cuisine combines flavors from Spain, the Caribbean, Africa, and, of course, cooking methods native to Honduras.

You’ll see menu headings such as “Desayunos (breakfast) Catrachos,” or “Antojitos (snacks) Catrachos,” or even “Cocina (kitchen) Catratcha.” But what does “Catratcho” mean? The word was coined in the 1850s when Hondurans fought under the command of General Xatruch, whose name was the inspiration for the new term.

Dishes like the popular bistec encebollado (beef steak), or the pincho res (marinated beef tips) are popular orders, as well as the seafood plates such as pescado frito (fried fish). With a 430-mile Caribbean coastline, seafood plays a major part of the Honduran food scene.

Pollo frito, another hugely popular meal in Honduras, is cooked to perfection at Mi Bella. The tender and crispy fried chicken is buried under a pile of cabbage similar to cole slaw, rings of pink pickled onions, chopped tomatoes, tajadas (plantain slices), and drizzled in a mayo-based sauce. The result is a brightly colored and filling dish that could be split between two people. 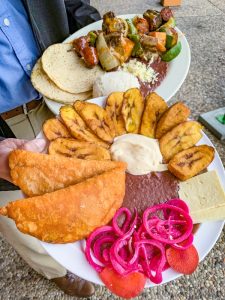 The Desayuno Catracho breakfast plate provides a sampling of fried plantains with cream, refried beans, tortillas, goat cheese, avocado, and fried eggs. Though sometimes this meal is served with beef, Mi Bella’s version is meat-free. Breakfast in Honduras is meant to be a hearty dish to get you through the day, while dinner tends to be a lighter meal, or snack.

Tortillas will always be present with a meal in Honduras, and Mi Bella is no exception. The corn or flour tortillas provided with the Desayuno Catracho plate don’t necessarily mean that you should create a taco out of all your breakfast ingredients, but instead gives you a bready option which you can use to enjoy each portion as your taste buds dictate, similar to a piece of toast or a roll in North American cuisine. Although flour tortillas are an option at Mi Bella, traditionalists would choose corn tortillas, as maize has been grown and eaten in Honduras for centuries.

Eating at Mi Bella and dodging the fried plantains with cream means that you’ve missed an absolute treasure. Pan-frying the plantains brings out their sweet flavor and creates a very thinly crispy outside layer in some spots of the plantain, leaving the inside soft and juicy. The cream sauce used as a dip is a slightly sour, heavenly contrast to the sweet fruit.

Fried yucca and tostones are two other sides that you’ll see on every Central American menu, but never in a Mexican restaurant. It comes highly recommended to try those items that distinguish a restaurant from the food you’re used to eating – even down to the drinks, such as Mi Bella’s grape soda which comes from… you guessed it, Honduras.

At Mi Bella, you may have to draw on your knowledge of Spanish to communicate more effectively with your server, unless you simply order using their handy picture menu. The Spring Branch District has a wealth of diversity within its borders, and residents have found that one of the best ways to experience and learn about the many cultures in our area is through food. Support local while grabbing an authentic taste of Honduras in your own backyard, whether you dine-in or prefer takeout.

In consideration of measures aimed at stopping the spread of COVID-19, staffing of Spring Branch District offices is limited at least through April 30, 2021 while staff works remotely on a full-time basis. Staff may be contacted as follows: