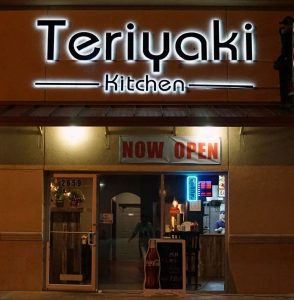 Opening the doors to Spring Branch’s Teriyaki Kitchen reveals an entirely remodeled wood and brick interior, and a plethora of delectable options to satisfy your lunchtime cravings. This family-owned restaurant was established in 2017 by couple Eunsuk and Woong Jung Park, experienced restauranteurs from Portland, Orgeon. Now hungry locals are flocking to Teriyaki Kitchen not just for the teriyaki, but for the restaurant’s Korean and Japanese flair that they have incorporated into their menu.

With the “teriyaki” craze of the Pacific Northwest in full swing, Eunsuk and Woong Jung first decided to open a teriyaki restaurant in downtown Portland with the help of an experienced friend in the industry. “You can’t go two blocks in Portland without seeing a teriyaki place,” says Judy, daughter of Eunsuk and Woong Jung. The family operated their restaurant for 15 years before relocating to Houston to join their daughter who had already made Houston home.

After spending a couple years transitioning into Houston life, Eunsuk and Woong Jung picked up where they left off, reigniting the fire underneath their grilled teriyaki business. “We didn’t specifically look in Spring Branch, but our realtor showed us this location when it was vacant,” explains Judy. The previous owner had seemingly abandoned the property, leaving behind a mess that the Parks decided to tackle, taking on the challenge of renovating the space and making it their own. 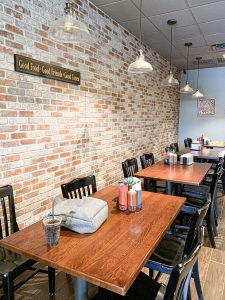 “When we came to Houston, we realized that teriyaki is not the same here. It’s a lot sweeter here, and not nearly as popular,” Judy notes. There was much room in the Houston food scene for a teriyaki concept, and the Park family were the ones to bring it. “When we first opened up, we got so many comments from people saying ‘we’ve been waiting for this!’”

But Houston in all of its cultural and culinary diversity has very different customer preferences and tastes compared to Portland. “There wasn’t much fusion within restaurants in Portland. There would be American restaurants, or Asian, but not a mix of the two. My parents found that our Houston customers enjoy the same teriyaki flavors of Portland but with added Korean and Japanese influence,” explains Judy.

That is why in addition to their grilled meats and seafood with house-made teriyaki sauce, you will also find the popular TK Box, a Japanese bento-style box with compartments designed specifically for lunch portions. The Korean kimchi pancake, Japanese ramen, udon, and katsu found their way onto their menu as well (lucky for us). The tender strips of pork or chicken katsu are coated in a flaky, crispy outer coating and served with a house-made katsu dipping sauce. Yes, all of the sauces that accompany your meal at Teriyaki Kitchen are house-made. 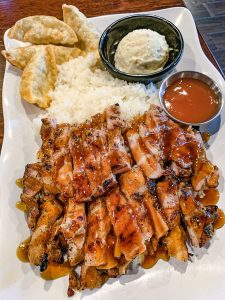 The often-ordered teriyaki chicken plate consists of tender, juicy bite-sized pieces of grilled chicken, with just the right amount of their tangy teriyaki sauce poured on top. The plate comes with a choice of rice (white rice is perfect with this dish), and an additional side of veggies, potato salad, or coleslaw. Their unique potato salad is creamy, slightly sweet and provides a great contrast to the meat.

Most of Teriyaki Kitchen’s advertisement has been word-of-mouth, and through positive online reviews. “My parents have a humble approach to the restaurant business,” says Judy. “My mom says that if people like the food, they’ll come back,” and this sentiment has proven true. Customers both call in for takeout, or order at the counter, choosing to dine inside with coworkers or family members. “My mom always been known to be a fantastic cook,” adds Judy.

With parents at the helm of the business, Judy’s sister also helps out on a regular basis, while her brother-in-law, who works in the restaurant business in Houston, assists in managing the restaurant. “I fill in where they need me,” says Judy. “This is truly a family-owned business. Customers even know my daughter,” she laughs.

“We had no idea that the neighborhood would be this friendly, and supportive of our business,” she says happily. As business continues to build at Teriyaki Kitchen, the Park family is grateful for the Spring Branch community, with their enthusiasm for trying new flavors and diverse cuisines, and supporting small businesses.