Skip to content
Home » News » At the Monarch School, Allowing Special Needs Children To Be Themselves
Previous Next

At the Monarch School, Allowing Special Needs Children To Be Themselves

Vicky was in second grade at a private Catholic school in Houston when she was diagnosed with receptive/expressive language delay, a cognitive condition that makes it difficult for her to say or comprehend complex sentences. Despite her learning disabilities, which also included dyslexia and dysgraphia (difficulty in writing coherently), Vicky managed to keep up with her peers until she entered middle school, around the time she turned 11.

“As she got older and started developing, I think her learning disabilities became more apparent and it became more difficult for her to manage,” Vicky’s mother Jennifer said. (Both names have been changed to protect their identities.) Vicky had difficulty making new friends, seemed constantly anxious, and began throwing temper tantrums at home and at school.

Vicky was soon given another diagnosis—borderline personality disorder, a mental illness marked by unstable moods and behaviors—and Jennifer and her husband concluded that their daughter needed a new school. “It was evident that something was wrong. We realized that she was in an environment that could not support her, so we tried other schools that had some elements of what she needed, but not the total package.” 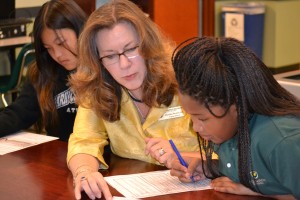 After trying three other schools, Jennifer and her husband finally turned to the Monarch School, a small school in Spring Branch designed specifically for children with neurological differences. Founded in 1997 with 28 students in the back of a Mennonite Church, the Monarch School now occupies a bucolic 11-acre campus on Kempwood Drive that includes state-of-the-art buildings designed around the special needs of its 130 students. About 80 percent of those students are on the autism spectrum, while others have a range of conditions including Tourette’s syndrome, bipolar disorder, and various anxiety disorders.

“From the design of the building to the chair the student is sitting on, we’ve thought through everything, and we’re looking for the best,” said Debrah Hall, Ph.D., Monarch’s head of school. The difference between Monarch and more traditional special education programs—the ones offered at public schools, for instance—are the individualized learning plans that Monarch’s teachers and therapists develop for each student.

“At regular schools they often want the student to focus on a textbook or a worksheet,” said Richard Klein, who has taught at Monarch for 15 years. “For some of our students, that’s too two-dimensional, so instead of focusing on that, they decide to create a commotion. A normal teacher would say that’s a disruption, but here it’s a matter of, ‘What are you trying to tell me? Do you need a break, do you need to be outside, do you need movement? Maybe instead of sitting down and doing this work, you could do it better standing up. Would you like to sit on the floor? Maybe you need manipulatives to do the work rather than abstract symbols on paper.”

While many special education programs try to teach students with neurological differences to act like “ordinary” kids, Monarch makes a point of accepting them as they are, encouraging them to become their best selves rather than fit into a predefined mold. The results can be extraordinary. After being at Monarch for just four months, Vicky is happier and better behaved than ever.

“She’s more calm, she’s taking responsibility for her actions, and she actually wants to read a book, whereas before that was a challenge,” Jennifer said. “She also told me, ‘I have more friends here than I’ve ever had in my life.’ When she said that, I just teared up. That’s the best thing a mother can hear.”