A discrete, 1950’s era, white house stands on Woodvine Dr. is lined with vines and surrounded by lush greenery. Visitors to Barfield Photography walk past the white picket fence and through the archway, and down the front garden walkway and onto the porch, all the while shaded by towering trees.

The photography studio has been designed to be an ideal location for family photos, professional headshots, portraits, or any shot with people or animal as subjects. Behind the camera is Deborah Wallace, owner of Barfield Photography. With Deborah’s eye for casting her clients in their best light, your personalized shoot may take place inside, or in the half-acre landscaped yard behind the house. 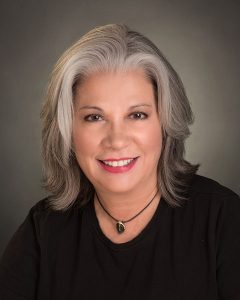 “There are not many studios with indoor and outdoor space anymore,” says Deborah. “What we have is rare, and it’s extremely useful. Our customers can have their hair and make-up done here, get changed, have flowers delivered for the shoot, and bring their friends and family to hang out,” she says. “It’s a much more controlled and accommodating environment than going on-location, which works best for certain types of photos.”

She finds that most of her time is spent “taking headshots in the studio, where the client can look at the photo on the computer; if they don’t like their hair, or what they’re wearing, they can change it.” Deborah has found that headshots have become increasingly popular with the prominence of social media, and especially Linked In.

Deborah makes on-location excursions for a variety of shoots as well, from weddings to political campaigns, to traveling domestically and internationally. She networks with a number of high-profile professional groups in Houston, many of which have her booked for annual events.

Deborah became the new owner of Barfield Photography in 2009 when founder Karen Barfield retired. Karen began her photographic journey in 1972 when she bought her first camera. In just seven years, she became the first president of the Professional Photographers Guild of Houston, one of the largest of its kind in the United States. By 1985, Karen had become both a Master Photographer and the first female certified professional photographer in Houston.

Karen made a name for herself in her field and developed a thriving business all while single-handedly raising two children. Awash in photographic gigs of all kinds, Karen hired a number of photographers over the years. “There was plenty of demand for wedding photographers to keep her staff busy,” says Deborah. “Everybody wanted a bridal photo and a family portrait on the wall.”

In 1992, Karen hired Deborah, a photographer with a degree in Art from University of Houston, with a similar story to Karen: Deborah was also pursuing a career in photography while raising two children on her own.

At the time, photographers were still having their images developed from film, and the business model was such that most of the profits were made when customers purchased physical prints. When photography started making the shift to digital platforms rather than film, the demand for physical prints gradually lessened, and the whole industry was forced to transform.

“A lot of photographers resisted the change, because of the steep learning curve and the money required to invest in new equipment,” says Deborah. For example, instead of sending a photo to a third party who would edit the photo by hand, the photographer is now required to have a strong knowledge of Photoshop.

“We had to change our way of thinking about how to sell our products,” says Deborah. “People in the industry disagreed about releasing electronic images to customers, but once websites started gaining popularity, it was something we had to accommodate to.”

Barfield Photography successfully navigated the changing times, though this was not the only storm that the business has had to face throughout the years. “Through everything, we’ve always stuck together,” says Deborah. “Our business survived Houston’s hurricanes, and now, this,” Deborah says, referring to the COVID-19 pandemic.

“Right now, I don’t have any business,” says Deborah, frankly. “We were taking clients all the way up until all non-essential businesses were closed. Jobs that I’ve had on the calendar year after year are cancelled. I hope to be able to hang on.”

The Barfield reputation has been its single-best advertisement, and will no doubt continue to draw in customers both old and new once they are back in business. “Most of our clients find us after being referred by friends who are happy with the work we’ve done,” says Deborah.

This reputation once led to Deborah receiving the highest possible rating for Texas photographers in The Knot magazine. The acclaimed publication praised Barfield Photography for being “accommodating,” “flexible,” and allowing customers a “personalized, unique” product – something that is still at the core of the business.

Even though Karen is retired, she and Deborah still see each other every day, in between Karen’s workout sessions and Deborah’s studio work. Even in the midst of the current health crisis, we know that when it subsides, there will be weddings, birthdays, job applications, and all types of need for a professional photographer. Plan ahead and support a small business by booking Barfield Photography while we wait this out together.