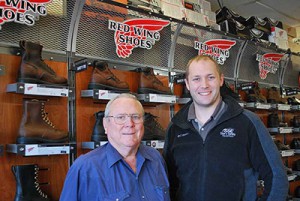 Sometimes, it takes the passion of a new generation to put a family business back on the right track. That’s what Kevin Doffing did for his father three years ago at Sam’s Safety Equipment on Sowden Road.

The company that started back in 1956 and that his father, Larry Doffing, bought in 1982 was struggling in 2009 and recorded its worst sales year ever.

Kevin Doffing said he saw a way to turn that around. He had worked at the store since he was four years old, earning a dollar for sweeping the floors. He continued to work there throughout his school years during summers and holidays.

After a stint in the Army, he tried to find a path in Corporate America, but that didn’t work out to his satisfaction, so he came back to help out his dad four years ago. Back then, they were still operating with paper records and ledgers––almost as if the age of computers had passed the little company by. “The power went out the other day, and in three seconds, we were back to where we were,” he jokes.

But Kevin got busy and started looking at ways to change the way Sam’s could improve its business in a 21st century marketplace and survive a recession.

“We’re doing well now. One of the things that pulled us out was the creation of the web site,” he says. “We started to capture new markets that we weren’t aware of and shift our inventory and our sales approach based on the online feedback we were getting.”

Knowing which inventory was selling and which was not gave the company the flexibility to grow in a smart way–like adding more fire safety equipment as OSHA regulations changed. He also credits the knowledge and contacts gained in a small business program offered by Goldman Sachs, “10,000 Small Businesses.”

“It’s sort of an MBA program on-the-run,” Doffing says. “We met twice a month for all-day sessions, going over the same kind of curriculum you would get in a business school.”

One of the greatest things that came out of there was just meeting other business owners. Now we still do a monthly business roundtable.“

Today, the company is expanding and sales figures of $1.3 million–near triple what they hit in that leanest year. A vendor has asked him to open up distribution in South Texas so he’s figuring out how to make that work.

But with all the dynamic changes, one thing remains constant: the principles his dad established.

“Customers come first. Family is a priority. We don’t stay open past 5 and we probably leave some money on the table,” he says. “This is a family business that I plan on building up to hand off to my kids and grandkids some day.”