Get It To Go or Delivered — Now With 100 Percent Vegan Cocktails! 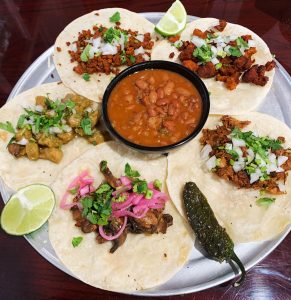 The last time I was at the cute little house at 1415 Murray Bay St. in Spring Branch, I was  contemplating whether to order the aptly named “Murray Bay Street,” a beef burger served between two glazed doughnuts with American cheese and bacon. A few months later, I was sitting down to a platter of tacos where the “meats” were soy, jackfruit and mushroom.

A few weeks after that, I wouldn’t be able to sit down at the restaurant in the little house at all because the owners, like proprietors across the county, state and country, had to switch completely over to take out and delivery due to the Covid-19 pandemic.

The owners of Cascabel, a full vegan Mexican restaurant that opened in November 2019 in the former location of Spring Branch Burger Shack (which is now located inside Simply Greek at 1900 Blalock Road), were awaiting their liquor license and planning a grand opening party when the orders came down that all restaurants and bars in Harris County would have to close or go to offering exclusively to-go meals and drinks. 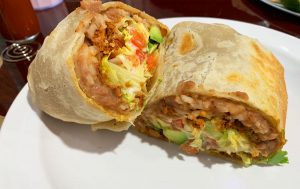 “We haven’t had to let any of our staff go because we implemented delivery service in house,” Austin said. “We also have been working with hospitals in Houston to donate food for their staff at least once a week.”

Austin said she began a vegan lifestyle six years ago. Arreguin — who is her best friend — is not Vegan, “but he completely immerses himself in the cuisine,” Austin said.

“David and I always went out to eat and he always got frustrated by me having to either make my own dish or have the chef whip me up something off the menu. Or he would see that salads and fries were my only option and that’s what sparked him to make me food,” Austin said. “When he started doing that, I stopped eating out and we would tweak his dishes. Then we both realized that everyone could enjoy what he would make.”

Austin said she and Arreguin looked at locations in the Heights, Katy, and River Oaks before they walked into the house on Murray Bay. “And we were home,” she said. 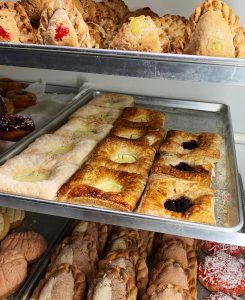 The patio sealed the deal, she said, and they liked that it was originally a house that they could decorate to their tastes.

“I grew up in the area so I knew I wanted to contribute in some type of way and what better way than with a business?” Austin said: “We both love Spring Branch — the people, culture, vibe.”

Cascabel offers a 100 percent vegan menu and the response from the Spring Branch area has been great, Austin said.

“We’ve had many customers not believe that what they were eating is soy or jackfruit. We also had someone write to us saying we shouldn’t advertise as ‘vegan’ because we use dairy cheese,” which is not the case as their cheese is potato-based, Austin said.

And they offer baked goods, too, which come with an interesting backstory.

While on a trip in Monterrey last year, Austin said she stopped by a historic 90-year-old bakery where the owner let her and her friends help bake some bread. She asked to modify the recipe due to being vegan and, after a long conversation and the baker learning she owned a vegan restaurant in Houston, they continued on their trip.

“Later on our driver tells me I have a phone call from the bakery and it’s the owner saying he will be in Houston and would love to stop by Cascabel,” Austin said. By this past January, the baker was working with them and training other bakers for when he can’t be there.

“So, what you’re getting at Cascabel are authentic artisanal pastries made from hand, with minimal ingredients — no chemicals or preservatives — and with a short shelf life,” Austin said. And, of course, they are 100 percent vegan, she added.

Cascabel is now serving breakfast all day as well as an extensive regular menu of to-go items including vegan versions of Mexican favorites like tortilla soup, quesadillas and tacos. Choose from proteins like chorizo (soy), al pastor (soy) and jackfruit. There’s even chile con queso (made with the potato-based cheese). And for dessert, try the vegan flan.

The new 100 percent vegan cocktail menu features a Tamarindo Margarita, a Paloma and a Piña Colada, as well as beer and an in-house Michelada.

“We have perfected traditional dishes everyone knows and loves without contributing to animal suffering and without compromising any of the taste,” Austin said.

The partners are working on a side patio for private events in the future, Austin said, adding: “We are ready for our grand opening once this goes away!” 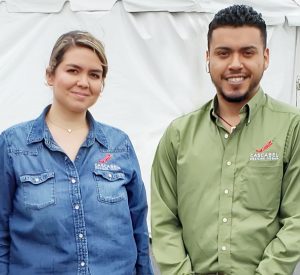