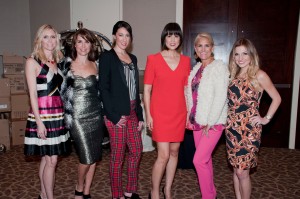 This Friday, celebrated Houston fashion designers Elaine Turner and Chloe Dao will be the special guests at the Spring Branch Education Foundation’s fifth annual fashion show and luncheon. Entitled “A Legacy of Style” and held at the Hotel Sonesta in the Galleria area, the event will feature runway models displaying the latest clothes and accessories created by Turner and Dao, all of them available for purchase at two on-site pop-up shops, with a portion of the proceeds going to SBEF.

Founded in 1993, the SBEF, a 501(c)(3) non-profit, supports the Spring Branch Independent School District by providing grants to individual schools and teachers, and college scholarships to high school students. Over the past 22 years the foundation has raised over $8 million for the district and received a Houston Business Promise Award from the Greater Houston Partnership. Earlier this month it announced that it had given the district a record $1,096,000 this year.

It raises that money through individual donations and through fundraising events like the fashion show, which began as a pre-event to the foundation’s annual gala but quickly took on a life of its own. “The first year we did it it was met with such great support from the community—it sold out almost immediately,” said Patty Busmire, who’s co-chairing this year’s event with Lara Bell. “It’s an opportunity for the community to come out and just enjoy themselves.” Having outgrown previous venues, the event will be held at the Hotel Sonesta for the first time. Organizers expect 400 to 500 guests, and will be selling tables up until the day of the show.

Past fashion show have featured the work of prominent national designers like Tory Burch and Trina Turk. This year, the foundation decided to highlight the work of two homegrown talents. “This year we wanted to go to local designers who are known nationally, so we reached out to Elaine and Chloe,” said SBEF executive director Cece Thompson. Dao, the child of Laotian immigrants, shot to fame after winning Project Runway in 2006. Her clothes are sold in stores around the country, including at her boutique in Rice Village, Dao Chloe Dao (formerly Lot 8).

Turner, who’s best known for her handbags and accessories, has stores in New York City and Nashville to complement her eight in Texas, half of them in Houston. “She and Chloe, they make real clothes for real moms and real women,” said event co-chair Bell. “So it’s a perfect fit for us.” Door prizes will include a dress donated by Dao, a handbag donated by Turner, and a $500 gift certificate from each.

In contrast to past years, when the designers haven’t always been able to attend, both Turner and Dao will attend the fashion show to meet and mingle with guests. “This is their backyard, so I welcome the opportunity for our group to see how much they have expanded,” Busmire said. “A lot of people don’t realize that because they think of them as our hometown designers.”

Of course, one big decision for guests attending a fashion show is what to wear. In this case, the answer seems obvious—at least to some. Thompson recently received an e-mail from the manager at the Elaine Turner boutique in CityCentre saying that customers were coming in to buy clothes specifically for the event. “I thought that was pretty cool,” Thompson said.