Climb Your Way to Fitness at the Texas Rock Gym 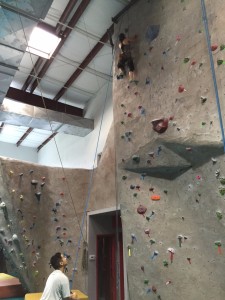 On a recent weekday afternoon at the Texas Rock Gym, an indoor climbing center in Spring Branch, a young woman scrabbled her way up the vertical face of a 30-foot-high wall, her hands and feet searching for brightly colored holds. A harness around her waist was hooked to a rope suspended from the top of the wall and anchored by her climbing partner, who stood on the padded gym floor, taking in the rope as she made her ascent.

“Wow, she’s really moving,” commented gym manager Roger Capuchino. Nearby, a team of workers on stepladders were unscrewing holds from another one of the walls so that they could reinstall them in a new configuration. The gym has 14,000 square feet of climbable surface, and it’s constantly changing the pattern of hand- and foot-grips so that its members don’t get bored, Capuchino said. “Whenever you come in there’s always something new and fresh.”

The Texas Rock Gym opened in 1996 as one of Houston’s first climbing centers. After a change of ownership, it moved into its current state-of-the-art facility in 2005. In addition to the main climbing area, where the walls reach up to 34 feet high, the gym includes a yoga studio and spaces for tai-chi, kung fu, and Primal Fitness classes. There’s also a party room for group gatherings. Visitors can bring their own equipment (climbing shoes, harnesses) or rent it from the gym. Rates range from $15 for a day pass to $110 for a monthly membership.

The gym offers four types of climbing—top roping, which requires a partner to belay the climber from a fixed rope; lead climbing, which is a more complex style in which the climber fixes her rope as she goes while being belayed from the ground; auto-belay, which uses a fixed, retractable rope; and bouldering, in which the climber ascends a shorter wall without rope or harness. Fortunately, the gym floor is well-padded, with extra cushions in the bouldering area. There’s also a children’s section of the gym with shorter walls and an easier climb.

Matt Treadway made his first climb at the Texas Rock Gym about a decade ago, and soon became a regular visitor. Eventually he got tired of paying to climb, so he took a job at the gym; he’s now one of its managers. “You have to be strong to climb, but there’s also this huge problem-solving element,” he said. “You brain has to solve the problem before your muscles do. That’s why a lot of people like it—it doesn’t feel like a workout, because it’s like a puzzle you’re doing.”

Capuchino nodded his head in agreement. “There’s a head game to it. When you’re on top rope you feel pretty brave. When you’re bouldering, it’s a little different. It’s like, I don’t know if I want to do that move, I’m going to be cautious about it.”

Before coming to the gym, Capuchino worked for the Houston Outdoor Learning Academy, leading groups of students on adventures around the country, from whitewater rafting to backpacking trips. “One day we came to the Rock Gym, and I just fell in love with it,” he said. “I loved the way it felt on my body, the physical aspect. And then the mental challenge—it’s like putting a puzzle together. It’s pretty awesome.”