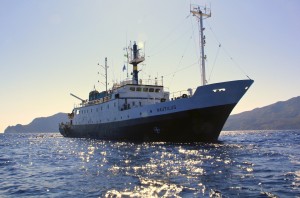 The Nautilus, a 64-meter, state-of-the-art research vessel operated by the Ocean Exploration Trust, put out a call for “teacher ambassadors” who would spend three days aboard. Shawn Gregg, an SBISD Cornerstone Academy eighth grade science teacher, was chosen. For Gregg, who studied marine biology and oceanography at Texas State University, the opportunity was a dream come true.

After boarding the Nautilus in San Pedro, California, Gregg spent the next three days meeting with crew members, learning about the vessel’s scientific research, and taking notes that he would use in his science classes at Cornerstone. The vessel was in the middle of a mission to map the sea floor off the coast of Santa Cruz, California. “Ninety percent of the ocean is unexplored and uncharted, so that’s one of the things they do,” Gregg said. “There are these mountains on the California coast, and you can see them come down to the ocean. They continue underwater and form one really big canyon underneath, near the Monterey Bay Marine Sanctuary. It’s bigger than the Grand Canyon.”

To map these underwater canyons, the Nautilus’s crew uses a multibeam solar array mounted to the bottom of the boat, which constantly scans the seafloor. For closer observation, it also has a Remote-Operated Vehicle (ROV), which can dive down up to 6,000 meters under water. The ROV is equipped with high-resolution video cameras and a special arm that can analyze water, soil, or animal samples. One of Gregg’s favorite experiences was watching the video feed from the ROV as it explored the ocean deep. “You’re seeing stuff that nobody has ever seen before—the creatures, the formations.”

Gregg also had a chance to talk with the crew members about their research. “I never stopped being amazed at what went on on the ship, just the way people worked together,” he said. “Anytime you wanted to, you could walk up to one of them, and they were more than happy to share what they do on the ship, their experiences.”

When school resumed in Houston last month, Gregg shared his experience on the Nautilus with his students. The Nautilus team even set up a live videoconference so that students could ask the research scientists about their work. “It’s really cool. The kids can interact with the scientists, and actually see video of what the scientists are talking about.” Some of his students have started monitoring the vessel’s live video feed in their spare time. “They like to see the odd creatures that the ROV picks up,” he said. “They’re really into it.”