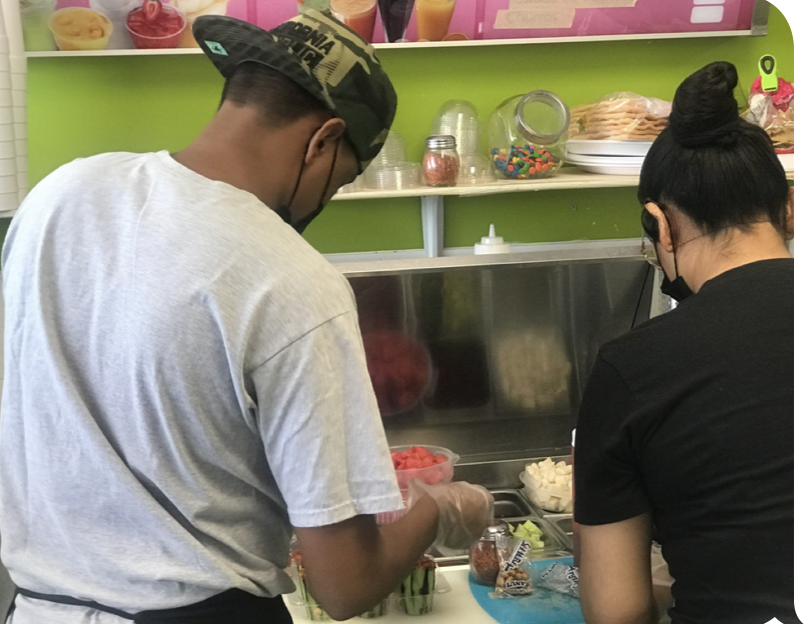 It’s a pepino loko, part of a constantly changing treat menu at Michoacana Paleteria y Neveria, 9405 Long Point Rd., one of the neverias, or ice shops, that have appeared in  Spring Branch strip malls over the last decade.

In Mexico, a nieve, or “snow,” means any kind of ice cream, popsicle, or frozen snack, usually sold by a street vendor. Today, though, neverias specialize in a whole range of rococo fruit salads, some containing nothing icy at all, artfully – and irresistibly — garnished with hot sauces, nuts and tart gummies.

Mexicans have been devising iced desserts for centuries: Moctezuma, the Aztec emperor, supposedly sent runners to the volcanoes overlooking the capital for snow to mix with chocolate.

But the nieves and other desserts in Spring Branch’s neverias include ingredients likely never dreamed of in the pre-Columbian world. One of the most popular of these desserts, the mangonada, is a slushy made of ice, pureed mango, and tart, tangy chamoy – a syrup made of salted plums or other stone fruits, introduced by Mexico’s Asian immigrants in the 19th century.

While no one’s sure about the modern mangonada’s other origins, the iced, golden dessert seems to have first appeared on Mexican streets in the 2000s, making their way to Houston’s Mexican popsicle, or paleta shops, some 10 years later.

Now, Houston’s neverias are on a creative tear, each offering a bespoke menu mix of fresh, healthy ingredients such as mangos, cucumbers and peanuts, supplemented by salsas, psychedelic-colored gummy worms, ribbons and noodles. 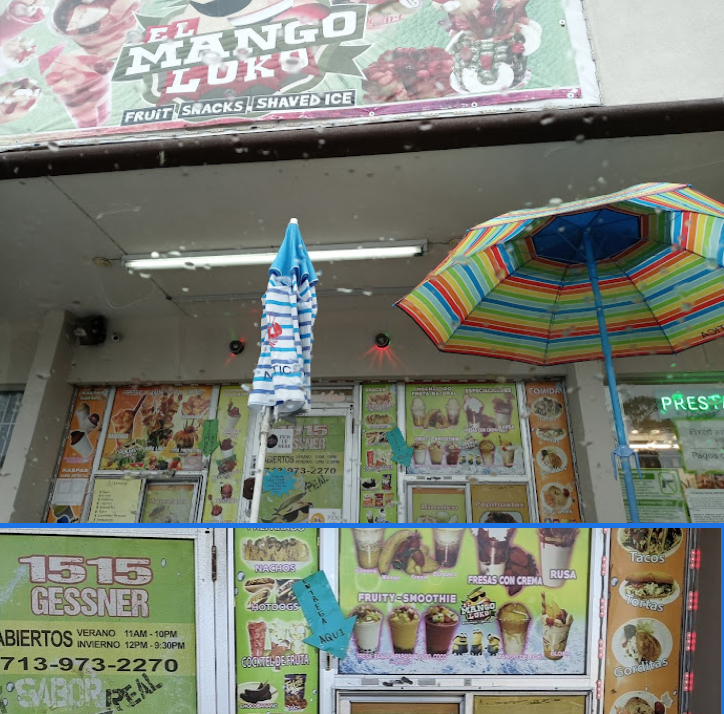 The most popular shops often look deceptively downmarket from the outside. At Mango Loko Kiosk, 1505 S. Gessner Rd., a young woman takes orders while peering from a sliding window overlooking a parking lot. There’s no restaurant here, just a couple of plastic chairs on the side.

But the creations that emerge from the cloudy window are lavish. The “pickledilly,” a dome of vermilion shaved ice, rises from a dainty circle of petals made of pickle slices, sporting straw rolled in chamoy and a rainbow-striped gummy ribbon looped on a skewer. The berry-flavored ice is cut with just a dash of pickle juice; a bite of one of the flower petals transforms the whole experience with salt, crunch and mouth-puckering vinegar. 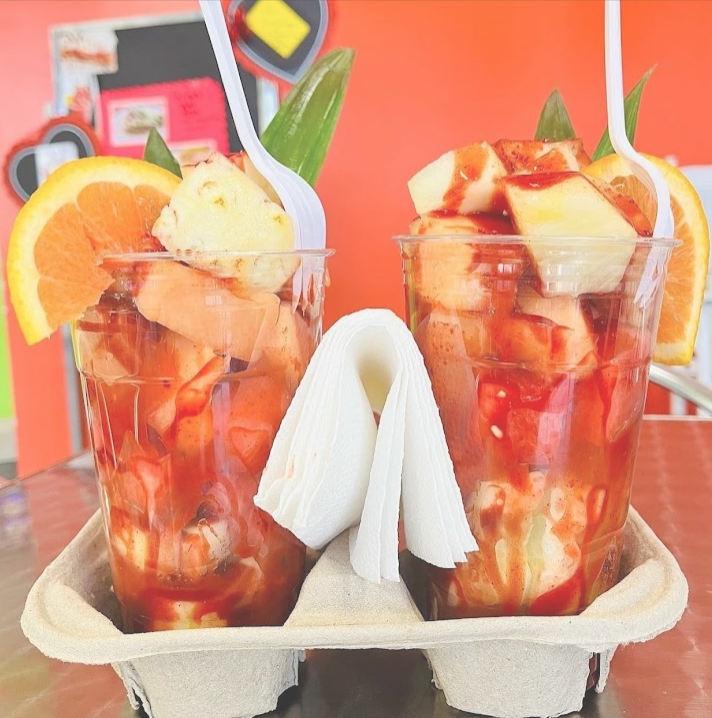 Right across the street, at the House of Mango, 1506 S. Gessner Rd., customers step up to an almost identical sliding window, this one specializing in savory snacks straddling the line between fresh, unadorned fruits and unapologetic junk food. The Styrofoam cup of elotes, is a variation on traditional roasted corn kernels, brimming with sweet, juicy, canned corn and thick snowy layers of Mexican crema and scarlet hot sauce.

Less traditional still are concoctions like Taki Loco, a cross between a Southern Frito pie and Mexican chilaquiles. Takis, the fiery corn twists beloved by Houston middle schoolers, are artfully laid out under a tiger-striped blanket of red sauce, white crema and yellow cheese, all squiggled out from a squeeze bottle. The effect is almost as substantial as actual food — with the extra-crunchy goodness of a processed, after-school corner store treat.

For a 27-year-old woman who calls herself Cynthia, it’s precisely that dash of nostalgia that makes House of Mango irresistible. Visiting Spring Branch to see her parents, she said, she made time for a Mango House visit just as the sun was setting.

“I haven’t come here in years,” she said, sitting at a picnic table waiting for her Ruso, a fresh fruit and cream parfait. “I feel like everyone needs to try this.”

While Cynthia’s family is Guatemalan, she noted, the neverias she grew up loving in Spring Branch are a Mexican phenomenon – and reflect Spring Branch’s recent demographic journey from mostly Anglo, to include Latinos and now Asians. 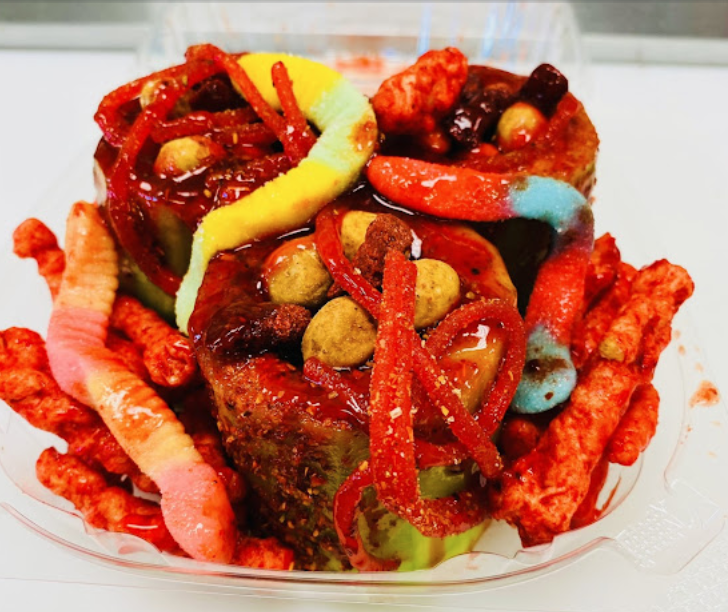 “If people ask for it, we create it.” Monsivais said. He points to a row of freezer cases filled with stacks of traditional handmade paletas. The handsome popsicles studded with whole Oreo cookies were invented by customers, he said.

But Ay Jalisco’s flashiest customer inspirations are its  loco ices: chips, cucumbers and fruit cocktails, all striped with chamoy and festooned with gummy ribbons or worms. In neveria parlance, Monsivais explained, loco (usually taken to mean crazy) simply means any fruit or vegetable salad topped with a gummy flourish.

“It means it’s not normal,” he said. “People bring their own ingredients, and ask for the craziness.”