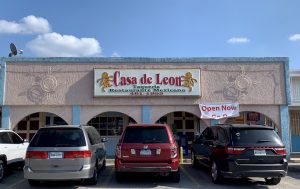 Early on in Governor Abbott’s partial lifting of the shelter-in-place protocols, we decided to drop in on a Spring Branch restaurant to see how it was faring during this “normal” we call new. After some deliberation and a slow and stately drive from one end of Long Point to the other, we settled on Casa de Leon, that venerable Central Mexican-style taqueria beloved for its low prices and late hours.

A sign on the door comforts diners that Casa de Leon is not taking its reopening lightly. In Spanish and English, the terse hand-written notice reads “Welcome. Keep your distance. Wash your hands. Don’t touch your face. Let’s do this right.” Inside the cozy hole-in-the-wall, my server was gloved and masked and the menus were of disposable paper. A trio of men sat at one table and a mixed couple at a second, leaving me plenty of room to myself. Still, I selected to get my order to go, even if that meant I’d be forgoing bottomless chips and as much of their salsa verde as I could slather them in. I am still on the discretion side of the discretion vs valor equation. 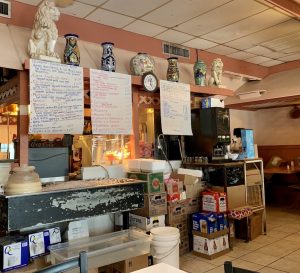 Advance notice of Casa de Leon’s low prices had most decidedly been smack-dab on the money: an alambres platter with beans, rice, and guacamole, an eight taco assortment, a hefty order of guacamole, and a paper bag of chips along with a trio of salsas (one red and one each of the creamy and tomatillo-based greens) came to just $30 plus tip.

The Mexican equivalent of shish kebabs, alambres are generally, as at Casa de Leon, comprised of beef wrapped in bacon along with onions and peppers. Then the whole thing is impaled on a spit and grilled. These were very tasty and made for killer tacos. Like butter, bacon is one of those failsafe ingredients that makes everything better.

Of the four varieties of taco we sampled, one of the standouts was the richly seasoned pastor, done up with fresh lime, onion, cilantro, and a generous drizzle of the spicy and creamy salsa verde. Birria is very much in vogue nowadays among Mexican food-loving chowhounds, but Long Point is a street on which it’s never been out of fashion, as El Hidalguense down at the other end has been widely renowned among goat-meat cognoscenti for years. So too should be Casa de Leon, where the birria tacos are most excellent. The lamb-like flavor of this tender meat needs little in the way of extra seasoning in my mind, but to each his or her own. I could eat it by the pound with just onion and cilantro. 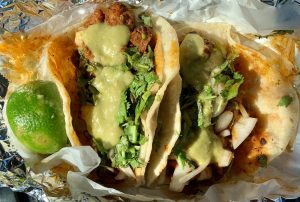 Casa de Leon is very much an interior Mexican place, so your Tex-Mex cravings will better be rewarded at Spring Branch staples like El Gallo. The authenticity comes at a very fair price — each good-sized, amply portioned taco comes in at a mere $1.59, a good price even at a taco truck. Combo plates clock in at $7.50, and their most expensive item — fajitas chillando (shrieking fajitas) — is only $14, or $16 if you opt for the fancy surf and turf and get shrimp along with beef and/or chicken.

In the end I wasn’t quite ready for an enclosed sit-down meal but I was glad to have gone for those tacos and alambres all the same, and I am glad to add Casa de Leon in to my Mex-Mex mix, especially when I hear the call of the goat and simply must have some birria. 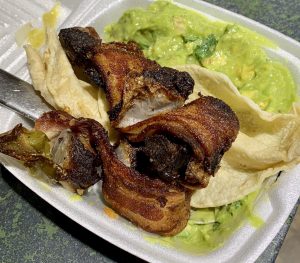 In consideration of measures aimed at stopping the spread of COVID-19, staffing of Spring Branch District offices is limited at least through May 31, 2021 while staff works remotely on a full-time basis. Staff may be contacted as follows: