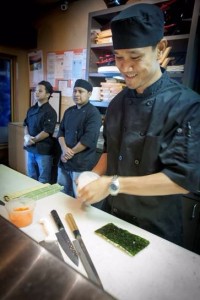 George Liau’s childhood was an interesting one. As a child, he moved from China to Central America, and watched as his entrepreneurial parents got involved in numerous business endeavors, from laundry and dry cleaning to food service. When it came time to choose his own career, George, not keen on washing clothes, dove right into the restaurant business.

When he decided to come to America, Liau initially immigrated to Los Angeles. But in 2006, a friend recommended Houston for its affordability and opportunity, and he took them up on it. After looking around for only a week, it was clear to George and his wife Katy that they’d found their home.

It was that same year that he started working his way up in a local Japanese restaurant. Starting out as a server, he pestered the chefs with his desire to learn. They admired his hard work and dedication, and under their watchful eye he started learning to prepare a few dishes.

Four years later, he moved to a friend’s restaurant to continue to hone his skills, all the while being encouraged by friends and family to open his own place. In 2012, feeling inspired by the trend towards healthy eating, he opened the doors at EurAsia Fusion Sushi.

At first it was difficult, filled with the growing pains that come with operating a new business. Liau had to handle everything, and did the work of a chef, manager, server, and accountant all at once. Despite the challenges, however, they broke even their first year, and by the second the restaurant had become profitable. 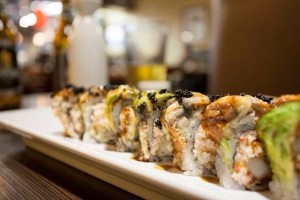 EurAsia Fusion Sushi has continued to grow, as the Liaus challenge themselves by expanding the menu, creating new dishes, and working hard to ensure that their main focus, customer service, is never forgotten.

As a result of their customer focus, they find that word of mouth has been particularly good for them. Their customer base expands well beyond Spring Branch, bringing in hungry diners from inner loop neighborhoods, and outlying spots like the Woodlands, Pasadena, and Katy.

The food at EurAsia Fusion Sushi is a blend of both Japanese and European cuisine. The Japanese influence is evident in the restaurant’s main fare (sushi, of course), but a quick look at the menus shows you Liau’s range. Dishes like beef carpaccio, Chilean Sea Bass Miso, seafood curry and a Kobe beef burger are available alongside standout sushi options like the unagi, a piece of lightly toasted freshwater eel flavored with a delicious sauce and roasted sesame seeds.