Fit Fuel Proves That Fresh, Healthy Food Can Be Delicious 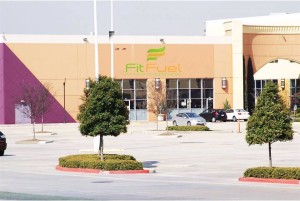 A few months ago, Carlos Aparicio was behind the register at Fit Fuel, the restaurant he founded with his wife Vanessa, when two young women walked in. They had been on their way to a nearby pizza joint, they said, when they noticed Fit Fuel.

“At first we were too scared to eat here,” one of the girls admitted.

“Well, because it’s healthy,” she said with a laugh.

“Wait,” Carlos said, “so you were scared to eat here, but you weren’t scared to put that greasy pizza in your mouth?”

The girls stayed, and have been loyal customers ever since, stopping by at least once a week. Their concern—that healthy food couldn’t possibly taste good—is something the Aparicios have worked to combat ever since opening Fit Fuel earlier this year.

“We always had a hard time finding a place to eat after working out—a place to have a clean, healthy meal,” Vanessa said. For years, she and Carlos had either cooked for themselves or relied on chain stores like My Fit Food, Snap Kitchen, and Fuel Kitchen & Health that sold prepackaged meals. While those meals might been low-calorie, the Aparacios noticed that they were often high in fat and carbs. Plus, they were tired of having to bring the prepackaged meals home to microwave. “We wanted somewhere we could sit down, have a healthy meal, but not have it be boring,” Carlos explained.

Fortunately, the couple was well-situated to start their own restaurant: Vanessa’s family has been in the restaurant business in Houston for 30 years, and Carlos is a certified personal trainer and nutritional consultant. “All my clients were like, man, the food is great on your plans, and the transformations are amazing,” Carlos said. “People think I’m not going to let them have any carbs, or any fat, but the food is delicious.”

After making a research trip to the West Coast to visit health food restaurants, the Aparicios went to work designing their menu. They found innovative ways to make familiar foods healthier, like substituting Stevia for the sugar in barbeque sauce, replacing the honey in honey mustard with agave, and making caesar salad dressing using a Greek yogurt base. Their burgers use buffalo meat instead of beef, and their popular lean meat, reduced-fat cheese, and lower sodium burrito bowls are similar to Chipotle’s.

“Even if you’re not working out, the food is just better for you,” Carlos said. “It’s fresh, we don’t use any processed meats, and everything’s natural. You feel better after you eat a meal, so you’re going to want to continue to eat that way.”

The restaurant, which also stocks nutritional supplements and protein powder, is centrally located in the Marq*E Entertainment Center, just around the corner from the LA Fitness where many of their customers work out. To the couple’s surprise, they’ve even had customers come to the restaurant on dates. Instead of steak and wine, they’ll order a buffalo burger and a smoothie.

Although the Aparicios are still perfecting their concept, they have expansion plans in mind for the future. “We get customers saying, ‘Are you going to franchise? We need a Fit Fuel in Katy, or Pearland,’” Carlos said. “It’s just really taken off.”