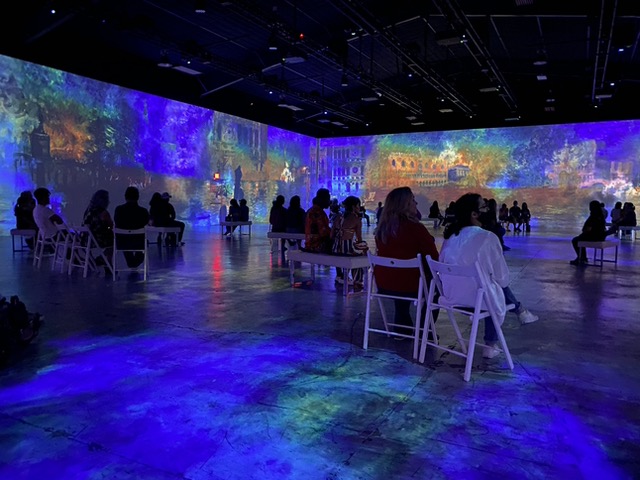 Immersive art is hot and the location of choice for immersion in Houston is the Spring Branch Management District.

The Impressionists are sharing the space with Immersive Van Gogh, with showings of van Gogh early in the day and Monet in the afternoon and evening. Immersive Frida Kahlo, which was also being shown at LighthouseArtSpace Houston, has ended its Houston run.

Also in the Spring Branch District but not at the same venue, Van Gogh: The Immersive Experience — the product of a partnership between producer Exhibition Hub and entertainment platform Fever — is still at The Marq’E Entertainment Center through Sept. 4 and could also be extended longer depending on public interest.

The Marq’E, with restaurants, bars and other entertainment experiences in the same strip, offers a chance to make a day of the art experience. Tickets for that exhibit are available here: https://vangoghexpo.com

The venue for Immersive Monet, about eight miles directly west of The Marq’E, is a 16,500-square-foot converted warehouse next to The Cannon, a flexible workspace and startup community, and The Powder Keg Houston, an open-air bar with food trucks, sand volleyball courts and a dog park. 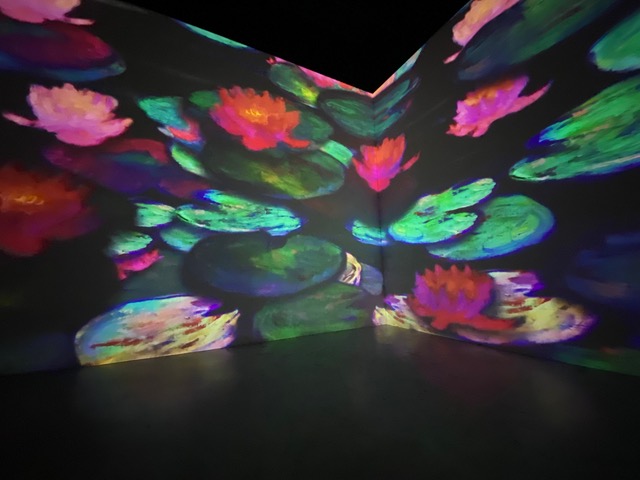 The Powder Keg is an easy place to stop and have a drink and relax before or after your immersive experience.

Upon entering the Immersive Monet exhibit, you will be greeted with informational displays on the Impressionist Movement and then ushered behind a curtain into a dark room dotted with padded benches and sets of chairs. VIP ticket holders receive a special cushion should you choose to sit on the floor to experience it from the ground up.

Some 500,000 cubic feet of projections composed of over 1.2 million frames of video bathe viewers in the brushstrokes and colors of Claude Monet, Auguste Renoir, Edgar Degas, Mary Cassatt and more.

In addition to Impressionism, the program features artists who birthed movements that nudged the art world into the 20th Century, including the robust marine paintings of J.M.W. Turner and the Post-Impressionist works of Toulouse-Lautrec.

Tickets, which begin at $29.99, are on sale at immersivemonet.com. On the way out, be sure to check out the gift shop for art by local Houston artists among the souvenirs from the van Gogh and Monet exhibits. 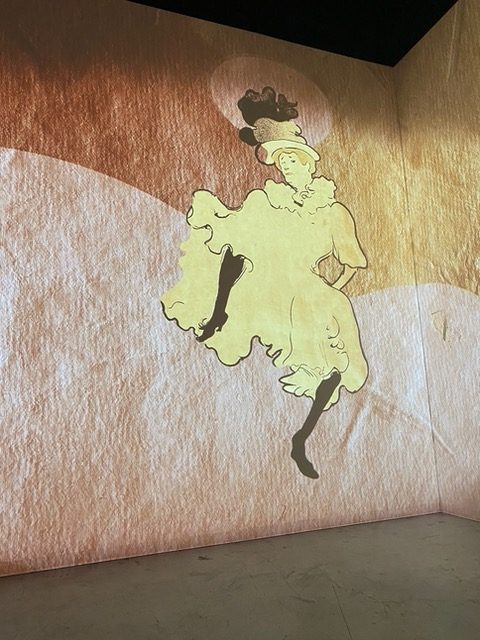 “The immersive shows that we have brought to Houston so far have been a cultural boon for the city,” said Diana Rayzman, co-founder of Impact Museums. “We invite Houston audiences who have caught Immersive Van Gogh and Immersive Frida Kahlo to experience the newest offering in the immersive art industry. And for those who have not yet attended an immersive show, Immersive Monet & The Impressionists is an outstanding introduction to the medium.”

Impressionism started around 1874 when the “Anonymous Society of Painters, Sculptors, Printmakers, etc.” hosted an exhibition in Paris independent of the Salon de Paris, a yearly exhibition in which a jury of artists from the Académie des Beaux-Arts selected the finest works and awarded medals. The Anonymous Society was founded by Claude Monet along with Edgar Degas and Camille Pissarro, among others, as a rejection of the norms strongly enforced by the Salon since the 17th Century.

A fleeting movement, the Impressionists went on to pursue their own unique styles to the late 1880s. Despite its brief moment in the spotlight, however, Impressionism spurred an artistic revolution.

Meanwhile, in 2022, at least five companies are battling to dominate the immersive art field across the country. Two, as mentioned, are competing exhibits in the Spring Branch District.

Rayzman, on behalf of Immersive Van Gogh and Immersive Monet, said the growing Spring Branch District area was a draw for the recent exhibits:

“There is a lot of development happening in the area and that was very appealing to us.”

Heading to one of the immersive art experiences open in, or coming soon, to the Spring Branch District? Here are some places nearby to stop for lunch, dinner or just a snack or drink: https://sbmd.org/eat-local/