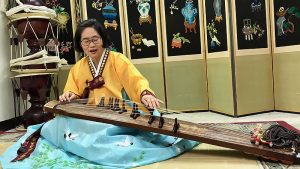 While sitting on the floor with her traditional Korean garment tucked around her, music teacher Myung Soon Ryu plucks and flicks the strings of the gayageum, a Korean music instrument. At first, she is playing a Korean folk song. Then she transitions to the instantly recognizable melody of “Amazing Grace.”

“We want people to hear what they know,” says Jong Choe, director of the Korean Culture Learning Center, where Ryu was giving her music demonstration. The center is located on the third floor of an office building on Long Point Road in the Spring Branch District.

While a familiar tune may draw them in, Choe and those involved with the center also want people to come hear and see what may not be familiar. Specifically, he said, “We want everybody to know about Korea.” 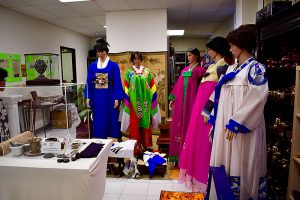 The Spring Branch District is the center for all things Korean — from restaurants to grocery stores to professional services. Long Point Road is “Main Street” for those of Korean descent living in Houston, said Choe.

For Korean language classes and events, Choe said, Koreans go to the Korean Community Center of Houston, located at 1809 Hollister St. But you’ll have to cross Long Point Road to find the Korean Culture Learning Center.

Chloe described the Culture Learning Center as an education center for anyone (Korean or non-Korean) wanting to learn about the culture and history of his home country.

First co-located at the Community Center, the Korean Culture Learning Center moved to its new location at 8831 Long Point Road, #301, last year because they needed more space. It is part museum, complete with interactive exhibits (ask to ring the Korean bell), and part classroom, with a room where teachers can give gayageum and drum lessons or lead a group in a traditional tea ceremony. 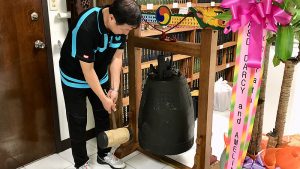 Even in the new space, though, the Culture Learning Center is already quite full. With six pallets of artifacts still in storage, Choe said his organization is planning to open up satellite centers. There is already a second location in Corpus Christi. Future centers are being discussed for downtown Houston, Dallas and possibly Oklahoma City, where they can spread out the collection — and spread education.

Just as Houston’s famous Menil Collection is primarily made up of the private art collection of founders John de Menil and Dominique de Menil, the extensive collection at the Korean Culture Learning Center in Spring Branch started with items curated by Choe’s father in law, Ho Lee. Lee, an honorary director of the center, is a descendent of the royal family of the last emperor of Korea.

“We are trying to remember our roots,” said Choe of the Culture Learning Center and its collection. “For the second and the third generation and on, we want them to remember their ancestors and the traditional way of living and acting.”

In addition, Choe said, he wants to introduce the Korean culture to non-Koreans.
“For many,” he said, “Korea is unknown.” 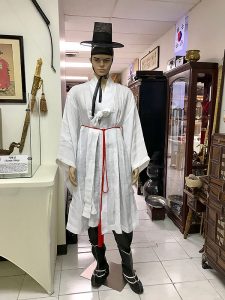 With 18 regular volunteers (and they are looking for more), the Korean Culture Learning Center has been able to do presentations at several local international festivals, as well as high schools and for private companies. In May, they will be doing a presentation for Chevron.

In addition, Choe would like to once again offer classes at the center for anyone interested in learning about Korean culture. When the center did that previously, they served about 100 students.

Possible classes that could be scheduled include sessions on the traditional clothing and etiquette of Korea, Korean history, the traditional tea ceremony, origami and music. Yui Soon Park, another teacher, is eager to share the Korean language. The sessions will be scheduled based on interest, Choe said, and asks anyone interested to contact him at the center by emailing KoreanCultureUSA@gmail.com.

Just a visit to the Korean Culture Learning Center will give you a quick dose of Korean history and a sense of the cultural pride of those involved. Though it is best to call ahead (832-275-4989), the Center is open most days and Choe or his volunteers are more than happy to provide tours and explanations of the floor to ceiling stacks of genealogy books, the traditional Korean garments, the model of a “turtle ship” (a Korean warship), the various implements used for ceremonies and cooking … and more.

How many items are available for viewing at the Korean Culture Learning Center? “It’s countless,” said Choe.