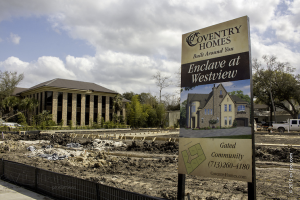 Approximately 80 percent of the Long Point reconstruction project has been completed, said Christopher Edwards of the engineering firm Cobb Fendley and Associates.

“They’re aiming to be finished by the end of April and are on track for that deadline,” Edwards added. Minor delays related to utilities have not thrown them off target, he said. As with any urban roadway project, there are always new discoveries underground, he added.

Storm sewers from Bayrun have also been completed, and construction crews are working on the sanitary sewers on the west side.

Beyond that, only little bit of work is left to do on the railings on the Buttermilk Creek bridge, Edwards said.

“It’s been slow and steady, but we’re almost there,” he concluded.