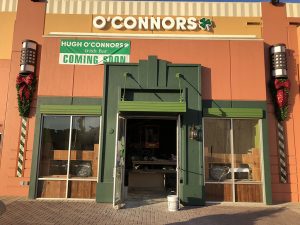 When news of Houston’s The Gorgeous Gael bar closing hit social media, the response ranged from the expected: “Oh no! I’m sorry to see you go,” to downright dramatic: “There is a dark cloud looming over Rice Village.”

Rice Village’s loss is the Spring Branch District’s gain as the owners of The Gorgeous Gael are about to open a new watering hole at the Marq’E Entertainment Center, 7620 Katy Freeway, in the Spring Branch District. The new bar and restaurant is called, “Hugh O’Connors,” named after Hugh O’Conor or Hugo Oconór in Spanish, born in Ireland and appointed governor of Texas by the Spanish viceroy of New Spain in 1767.

“We just liked the name, to be honest,” said David Roche, who — along with Peter Kingston — is the owner of Hugh O’Connors. The partners are planning a soft opening for this Friday, Dec. 14, at 5 p.m., Roche said, and hope to open the kitchen the following Monday if all goes to plan.

The Gorgeous Gael was open for 4 1/2 years at 5555 Morningside Dr., Houston, in Rice Village, and business was going well, Roche said.

“Rice Village is going through a radical change and, unfortunately, we were priced out of the market. We had options to renew, but we couldn’t make it work,” he said. 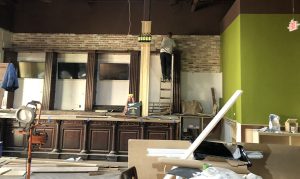 Marq’E landlord Levcor had approached them nearly three years ago to open a similar location as The Gorgeous Gael, Roche said.

“We looked at different locations in the center over the years and finally the right unit for us became available,” Roche said. “We have a fantastic landlord and got on well since the beginning. That was a big part of the decision, along with that we really believe in the Spring Branch area. When we first started our research three years ago we could see the growth and change it was going through.”

Roche added that Levcor has big plans for the Marq’E and has already made “a lot of positive changes.”

The new Hugh O’Connors space was a security office and a storage space, Roche said. Now it will first and foremost be an authentic Irish Bar with good bar food, he said.

“It’s going to be quite similar to The Gorgeous Gael. We want to have that warm, pub feeling in a clean environment with good food. We will have a lot of Irish friendly staff with a great Irish whiskey selection and good Guinness on tap,” Roche said.

And for all those who would frequent The Gorgeous Gael to catch the game, Roche said Hugh O’Connors has that sorted.

“Sports played a big part in the success of The Gorgeous Gael,” Roche said. “O’Connors has a fantastic TV set up with 17 TV’s and a big screen. We will also have the Sunday Ticket for the NFL.”

To keep up with the opening of Hugh O’Connors at the Marq’E, follow @hughoconnors on social media or visit their website, www.hughoconnors.com.