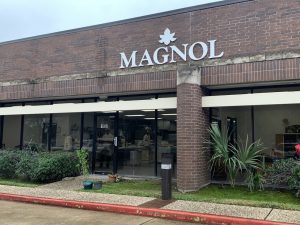 “Beguiling” may not be the most obvious adjective for tarts from a local bakery but then Magnol French Baking isn’t your usual local bakery.

With much fanfare, Spring Branch’s Magnol French Baking opened in Spring 2019 as a wholesale and retail bakery. When you come upon it, though, you might be wondering: “Is this it?”

Located in a nondescript business park near the corner of Hempstead and N. Post Oak, Magnol is creating beautiful things in a pretty plain wrapper.

And, based on early success in Spring Branch, owner Otto Sanchez said future plans include the opening of small satellite bakeries around town and using the current bakery in Spring Branch to supply them. 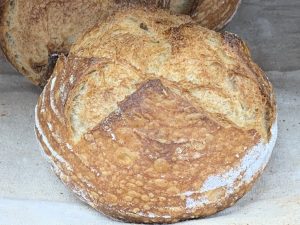 “Business in Spring Branch has been great. The support from the community has been instrumental in our early success,” Sanchez said. “We are extremely lucky and glad we are in the neighborhood.”

Sanchez said he and Magnol’s co-owners started mostly doing wholesale but attracted enough patrons that they have turned it more into a retail bakery than a wholesale business at this point.

“We knew it would eventually go in that direction,” Sanchez said. “We just did not expect it to happen this quick.”

It could have something to do with the product.

“This is the best bakery outside of France,” one reviewer proclaimed online, describing the tarts as “beguiling.”

Another reviewer said she was barely home five minutes before her family had finished off all their pastries purchased that day.

“We were totally out of control but I have no regrets,” she said. “Everything was incredible.”

Magnol, which specializes in organic, authentic artisan French bread and pastries, is the culmination of a long-term dream.

After what he describes on the Magnol website as a “self-imposed exile,” Sanchez said he told himself he would not come home to Houston until he had become the best baker he knew.

“After 10 years on the road, I made it back, and have spent every moment envisioning ways to elevate the bakery and pastry profile of the city of Houston,” he said.

Chef Otto’s professional career as a Pastry Chef took off when he moved from San Salvador, El Salvador, to Houston in 1992. Eventually, he earned the role of Executive Sous-Chef of Pastry at Michelin-starred Chef Alain Ducasse’s MIX in Las Vegas. Most recently, he held the position of Executive Pastry Chef at La Table here in Houston.

Sanchez co-owns Magnol with his wife, Kristen White, and Matthieu Cabon, who is the head baker and, as Sanchez describes, “actually French.”

“Matt does mostly the bread, while I help with the bread and also am in charge of the pastries,” said Sanchez.

“The concept really was just us understanding that the market needed a true French bakery with breads that are made with a lot of technique and great ingredients.
Since I started my career here in Houston, we made use of the connections I have forged over the years with some of the most accomplished and esteemed chefs in the city to launch the project with their support, so we did not have to go door to door presenting our products, which gave us some confidence,” Sanchez said. 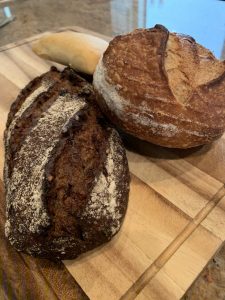 But anyone can sample and bring home the hottest bread in town by visiting the retail outlet, which is also the bakery. There is a Monday to Friday menu and a Saturday and Sunday menu and both are available at https://www.magnolfrenchbaking.com/menu.

On a recent visit, Chef Otto was at the front, where he explained that he uses only organic flours to create baguettes and boules, offering up samples of the fresh baked goods.

From artisan baguettes to chocolate croissants to fruit tarts, Magnol has everything you need to bring France home from right here in Spring Branch.