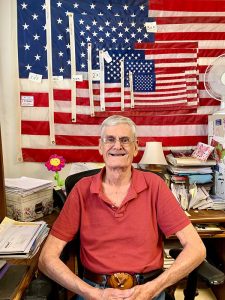 Independence day, or what we commonly know as the Fourth of July, is a day when Americans come together to celebrate our declaration that the nation would operate independently of Great Britain. The specifics of our intentions were drawn up in the Declaration of Independence, and while our nation still operates as a unified group of independent states, we’ve grown significantly from that small group of 13 states.

And, our flags have changed to reflect that.

One thing that hasn’t changed much however, is our love to celebrate by flying Old Glory. Some folks fly smaller flags by their front door, or wave even smaller hand-held flags at the parades, while others prefer to fly larger versions in their front yards. Small or large, flags are ever popular in the United States, and not just for patriotic occasions. 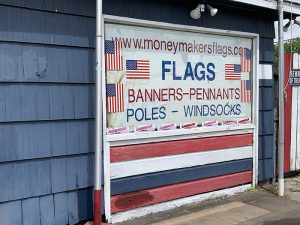 At Money Makers Flags, located at 1517 Blalock in the Spring Branch District, you can find American flags of all sizes. Since 1987, the family-owned business has been selling the American flag, as well as any other flag you could possibly want, plus banners, pennants, windsocks and more.

Owner Phyllis Rogers, who started the business with her late husband, Pete Rogers, said they owned several businesses before Money Makers, including selling impulse items at wholesale. At one point, they added windsocks and flags to their inventory.

“We fell in love with the flags and decided to give it a try,” Rogers said. They leased their current store location, which was a private residence, and then bought it the following year. 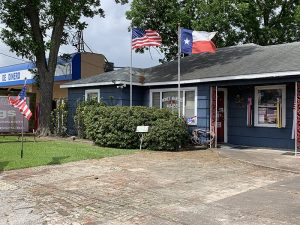 A longtime Spring Branch resident, Rogers said she has seen the area develop and grow. “It has always been a friendly area,” she said, adding that she has been impressed with the recent beautification projects in the area.

While many of her customers come from the Spring Branch area, Rogers said she has had return customers from all over the Houston area. In addition, she said, Money Makers offers online shopping at www.moneymakersflags.com.

Now that she is past retirement age, as is longtime employee Glenn Underwood, 78, who has been at the store since its first day in business, Rogers said she is taking it year by year after 32 years. Pete Rogers, pictured dressed as Uncle Sam on the company’s website, passed away in 2016.

“Every year I think, is this the year to retire?”

But Phyllis Rogers, who was making custom flags for a customer at the store on a recent evening, remains there this season, anticipating selling more American flags with Memorial Day and Fourth of July coming up. 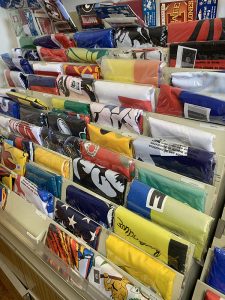 Underwood said the store’s biggest seller is the 3 by 5 American flag. But they have them in many other sizes, too. Need the flag of any other country? They have it. The Texas flag? They got it, as well as any other state flag. Also, pick up a flag to show your support for your favorite sports team. They’ve got a huge variety, especially for Houston teams. Know a recent high school or college grad? Money Makers has you covered with a variety of school flags.

June is Gay Pride Month, and Money Makers sells rainbow flags. They also go to the other end of the political spectrum. Trump 2020 flags are available now.

“We probably have the largest variety anywhere,” said Underwood. While discount and sporting goods stores may carry flags, he said, they don’t carry as wide of a selection. And Rogers added that, if you need a part for a flag assembly, they sell those when other stores might not.

In the day of Amazon one-day shipping, it’s easy to just click away and purchase a flag for the next holiday or event, but it doesn’t come with the same warm feelings and personal touch you get from a visit to Money Makers. And, as the owners used to specialize in impulse items, you may walk out with an “It’s 5:00 Somewhere” banner or a purple octopus windsock, too.