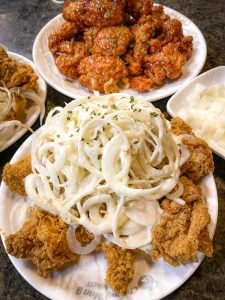 Inspired by American fried chicken, but spun in a whole new direction in South Korea, Korean fried chicken (abbreviated as KFC) has come full circle, arriving in the United States and winning over American taste buds. Choong Man Chicken is Spring Branch’s newest KFC hub, and has quickly become one of Houston’s favorite sources for what is considered a “soul food” in both countries.

Opening in 2009, Choong Man has nearly 200 restaurants in Korea, where Korean fried chicken options are as numerous as coffee shops in the United States. Because it’s also one of the most popular delivery foods in Korea, you’ll never find yourself searching too long for chicken if you visit. KFC is not commonly eaten as a filling meal, but instead as a snack, happy hour, or an after-dinner treat in Korea, and subsequently in Baltimore, Atlanta, Chicago, and finally, Houston.

The fact that Choong Man is almost hidden away in a strip center off Gessner is the first indication that this place is a foodie gem. Inside you’ll notice tables in the center and private dining coves for groups on the sides, a similar concept to the private rooms in Korean BBQ restaurants.

Those of us who grew up with southern style fried chicken may not be used to fried chicken with sauce and seasonings. But sauce is not reserved for grilled chicken wings in this tradition; Choong Man offers a selection of original fried chicken, garlic soy, garlic spicy, red hot pepper, and curry chicken. Their “Snow Onion” chicken comes with a pile of creamy onion slices on top, similar to an onion-dominated and crunchy cole slaw. “Hot Snow Onion” comes with a spicy sauce poured over the onions, and the “Curry Snow Onion” has curry drizzled over the onions. 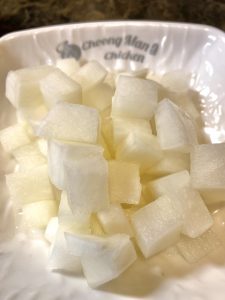 Don’t ignore the last section on the menu: Tikkudak Chicken, coming in garlic soy, red hot pepper, and curry varieties. This is a particularly unique twist on KFC, as the chicken is fried not once, but twice in a charcoal “tikku” oven, “for an extra crisp and crunch” as described on the menu, and a smoky flavor. The best course of action is to order a couple half-chicken portions of the KFC and an order of Tikkudak to get the full range of flavor.

Chimaek is a word thrown around in KFC culture that determines what you must order with your chicken: beer. Chimaek combines the words “chicken” and “maekju” (beer), for a one-word meal, stuck together almost like “mac & cheese.” The other non-negotiable element to the KFC experience is the bowl of chicken-mu, white, cubed, pickled radishes. Korean cuisine has mastered the art of including as many contrasting flavor and texture profiles into one meal as possible, including sour, sweet, crunchy, tender, hot, salty and bitter. Fermented vegetables accompanying meat is always a winning combination in Korean dining.

Expect about a 20-minute wait for your chicken, as Choong Man fries it to order, rather than using heat lamps to keep pre-fried chicken warm. When your various piles of chicken arrive, the hardest part is knowing which flavor you want to try first. Regardless, the first thing you’ll notice when you crunch into a piece of chicken is the difference in the batter. This is a defining factor of KFC, as the general preference in Korea is for a thinner layer of batter without the signature nooks and crannies of southern fried chicken skin. 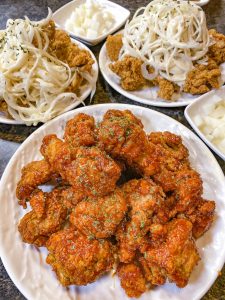 With Spring Branch District’s reputation for the best Korean food in Houston, it comes as no surprise that the first Choong Man in Texas would make an appearance in this community. And with a chimaek spread like this, you’re bound to walk out the doors with a sense of “fullness,” or “abundance” – the meaning of the word “choongman.”