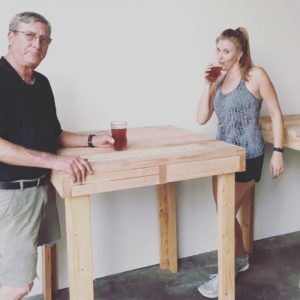 Jennifer Edwards is co-owner of 4J Brewing Company, which opens in June.

Why did you decide to open this brewpub in Spring Branch?

I’ve lived in Spring Branch my whole life. My mom went to Spring Branch High School, so she’s been here even longer. I began brewing beer at home with my dad when I would come home from college. We called it “Making some, drinking some.” We always had a beer in our hand as we were doing the brewing.

How did your dad learn to brew?

Actually, his own dad homebrewed for a long time. He said that when he was growing up, his dad would brew beer in a bathtub. I keep asking him where the recipe is, because it would be awesome to pull that out.

When did you decide to step up from home brewing to opening a retail location?

I was actually laid off from Wells Fargo a few years ago, which turned out to be a blessing in disguise. While I was trying to figure out what to do with my life, I was always home brewing with my dad. People would come over and try our beer, and everybody loved it. So it was like, how about we turn this into a real business? My sell to my parents was: we can make money to support our hobby. So we started the alcohol licensing process at that time, which takes a while.

What does the name of the brewery mean?

I’m one of four sisters, and all our names begin with J. It’s also the name of our ranch in Central Texas. Incidentally, all of the spent grain left over after the brewing process we take to the ranch to feed to the livestock.

How many members of your family will be involved in the brewery?

My mom and I are co-owners, and my dad and I will be the brewmasters. My sisters aren’t officially involved, but they’re fully supportive.

Will you be serving food?

It’s just beer for now. We’ll have snacks, and there will be rotational food trucks. But eventually, when we expand, we’d love to have food.

How do people react when you tell them you’re opening a brewpub?

Everybody loves that it’s in Spring Branch; that’s been a big part of it. It’s a pretty untapped market. And everybody loves beer. It’s a good industry to be in. It’s a happy industry.

Where do you see 4J fitting into Houston’s larger beer scene? The city seems to be going through a beer renaissance at the moment.

Absolutely. We’re part of the Texas Brewers Guild, and every month we visit a different brewery here in Houston. This industry is such a good, positive industry. Everyone’s so nice, so helpful. Everyone’s open to helping each other even though we’re all competitors.