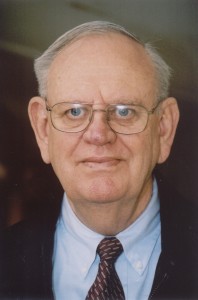 Last week Wayne Schaper, Sr. announced that he was stepping down from the Spring Branch ISD Board of Trustees after 14 years on the board and 55 years with the district. He was first hired in 1961 to teach math and coach sports at Landrum Junior High School (now Landrum Middle School).

How did it feel to step down from the Board of Trustees after serving for so long, and before that working as a teacher?

I’m going to miss it, really and truly. But I have some health issue, and just don’t have the energy to be a member of the board anymore.

What are you most proud of from your time on the board?

The Spring Branch community. Ever since my wife and I moved here in June 1961, this community has been one of the greatest, and it supports our school district 100 percent. I’m proud of every person in the Spring Branch system who has contributed to the district.

Is there a particular initiative you see as your legacy in the district?

I would point to the bond program of 2007, which enabled us to replace 13 elementary schools, and the old Spring Branch High School. I’m really proud of the bond issue and all the construction it funded.

You started out as a math teacher in the district, right?

Yep, I taught mathematics at Landrum Junior High, and I coached football and baseball at Spring Branch High School.

You also served as principal of Memorial High School for 23 years. What was that like?

It was wonderful, and Memorial High School is a wonderful place to have been. The students and parents were 100 percent supportive of what Spring Branch was trying to do. We had such great support from the community—and it’s like that all over Spring Branch, not just Memorial.

In 2012 Spring Branch ISD renamed its Central Administration Building after you. How did that feel?

I was very humbled. It was a complete surprise. I don’t know if I was deserving or not, but it was a real honor to have the building renamed after me.

In your view, what role can organizations like the Spring Branch Management District play in improving Spring Branch?

The District is already improving the area—we’re seeing it all around the area, for both the businesses and the homeowners. You can just go down Long Point and see how that’s improved, go up in the northeast section where all the new homes are going in. There’s been a huge turnaround in the northeast section of the district, and I attribute that to the Spring Branch Management District, in particular

[SBMD board member] Victor Alvarez, who has really made a major effort there. He has really, really, worked hard for the school district.

What are you looking forward to in retirement?

My wife and I would like to do a little traveling, visit places we haven’t been able to see while I was on the board. I’ll be turning 80 in January, but I will be continuing my work as treasurer and business manager at Holy Cross Lutheran Church, which is a volunteer position.