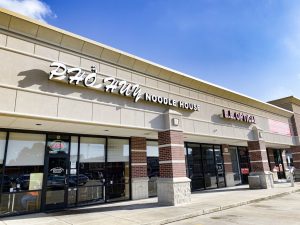 Pho Huy’s popularity in the Spring Branch District for the past ten years goes to show that it is possible to grab a tasty bowl of Vietnamese pho outside of the Little Saigon area of Houston. Although Spring Branch is renowned for its Korean BBQ, it wouldn’t be Houston without a great deal of diversity and quality in its culinary options.

You might be surprised to see Pho Huy already open at 9AM, but it makes sense once you learn that pho is traditionally eaten as a breakfast food. Street vendors in Vietnam sell pho and other warm soups beginning at dawn, until they sell out before lunchtime. In the US, we typically associate pho with lunch, especially if we are craving something light. Luckily for both breakfast and lunch crowds, Pho Huy closes up shop at 9PM every day, allowing us to satisfy our hunger throughout the day. 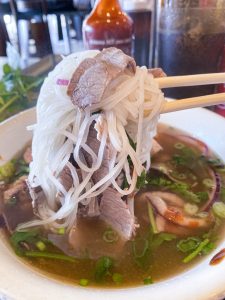 Ordering a “small” bowl of pho yields a bowl large enough to serve at least two people. Therefore only those with an extraordinary appetite or have several friends wanting to share the bowl should order the “large” portion. The classic “soup and sandwich” lunch combo is not on the menu for this reason; and ordering both will result in a skeptical waiter reminding you that “that’s a lot of food.”

But if you do decide to try both pho and a pork banh mi, the saltiness of the broth and the sweetness of the pork strike a delicious contrast that will keep you going back and forth between the two dishes, with frequent sips of café sua da (Vietnamese iced coffee). Condiments such as Sriracha, plum sauce, and soy sauce sit on every table and are meant to offer an extra boost of flavor to your pho, as you will see at most pho restaurants. Try the broth first, and decide for yourself whether you need to add a dash of something sweet, salty or spicy. 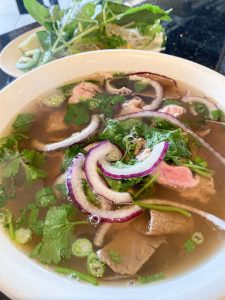 But before the pho arrives steaming to your table, a small mountain of greenery is delivered. No, this isn’t an appetizer. This plate of Thai basil, bean sprouts, cilantro, jalapeno and lime is a staple element of the pho experience. Some people will simply dump the entire plate of leaves and veggies into their bowl of pho, and others will tear the basil into shreds and put them into the bowl, in an effort to release the maximum amount of herbal flavor. In the end, it’s up to you what kind of flavors you prefer, and that’s part of the beauty of pho.

With twelve different beef pho dishes and four chicken pho bowls, a good deal of options are available regarding cuts of meat and number of different cuts in one bowl. “Pho” actually refers to the noodles themselves, which at Pho Huy are white, bouncy and al-dente, refraining from sticking together or getting gummy. Immersed in the chestnut-colored broth, the noodles are mixed with thin strips of red and green onions, and cilantro.

If you love cilantro, you’ve come to the right place. The banh mi thit nuong is piled high with leafy cilantro, covering its stash of pork hidden between the two slabs of French bread. Biting into the banh m, you immediately taste the strong charcoal-grilled flavor that permeates the strips of pork. Without this smoky flavor, the banh mi would simply be a pork sandwich. The grill, the soft French bread with its crispy exterior, the pickled vegetables, and the creamy mayo combine their distinctive flavor profiles to create a simple, but precisely executed banh mi. 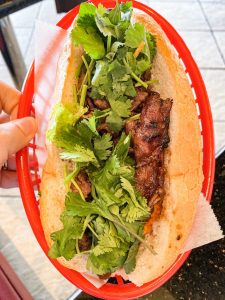 Come take a seat in Pho Huy’s clean, well-maintained dining area, and find out where Spring Branch locals have been getting their pho fix for years.