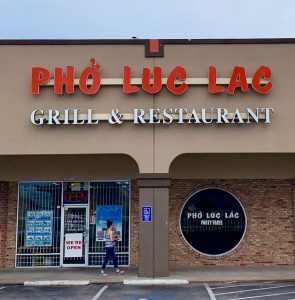 When you think of ethnic fare in Spring Branch, the first flavors that come to mind are Mexican and Korean, and then you remember that the district is also home to Polonia, Harris County’s only Polish restaurant. And when you think of top-notch Vietnamese restaurants, you tend to think of Chinatown, Midtown and maybe also Veterans Memorial, if you are a dedicated H-Town chowhound. All of those areas feature Vietnamese restaurants in quantity, but if quality and authenticity are all you are after, you don’t need to venture out of Spring Branch, because Phở Lúc Lắc is right there on Kempwood at Bingle near the Mytiburger.

A Buddhist shrine comprises some of the only decor in the spotless and Spartan dining room, a bare-bones aesthetic it shares with many of its counterparts elsewhere in Houston and presumably also in Vietnam. Luc Lac lets its food do the talking for them, and the language it speaks is both fragrant and tasty and it won’t cost you a pretty penny to learn and enjoy.

We know Viet-style thin-sliced pork marinated in soy and fish sauces and brown sugar and chargrilled — to be a wonder of the planet earth, and so we ordered it as part of two of the dishes we sampled there on a balmy Saturday afternoon.

Based on an internet recommendation, we sampled the pork spring rolls, and we heeded sound advice: both of the large, chewy, and sticky rolls were dunked in their Sriracha-dotted, peanut-topped brown sauce and devoured as soon as I photographed my take-out order, but before they so much as made it in the passenger compartment for the ride home.

That same fate met a couple of the bánh bôt loc — pork and shrimp-stuffed tapicoa ravioli served tamales-style inside banana leaf wrappers. Dipped in a delightfully belly-warming, sweet fermented fish sauce, this dish typical of Vietnam’s ancient capital city Huê can be enjoyed equally either hot from the steamer or at room temperature and thus make for a great all-day snack. 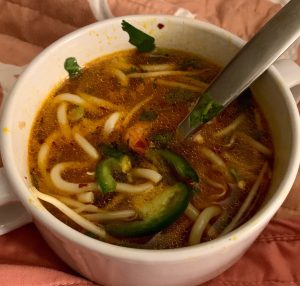 Set aside for later devouring was a generously portioned order of grilled pork and Vietnamese egg roll vermicelli, garnished in the usual manner: with lettuce, bean sprouts, sliced jalapeno and lime, and a bowl — actually, two bowls — of Vietnamese Udon: shrimp and fishcakes served in transcendent golden broth reddened a little with lively chili oil paste. All in all, there was enough food for four meals and the whole shebang came in at under $30.

Pho Luc Lac has long been in the business of catering small affairs and there is a whole page of their menu dedicated to party trays and prepared meats by the pound. While parties might not be such a great idea right now, if you are the kind of person who doesn’t mind eating the same delicious meal back to back to back, or if you have a large network of quarantine buddies or a large family, it’s worth considering springing for a tray of fried rice, a pound or two of their chargrilled pork (at $14 per pound), or even a small vat of Bun Bo Hue (or another soup), at $80 per cauldron.

This restaurant is housed in fascinating strip mall alongside other Vietnamese establishments — Thang Hung, a mid-sized grocery; Royal Tapioca (home of interesting banh mi and great drinks), and Crab Ave., an Asian / Cajun seafood / crawfish house where the Korean jjam bpong soup is quite popular. The non-Asian businesses in the strip are almost all Mexican — Tepatitlan taqueria, Guadalupana meat market, an ice cream parlor, and Tortilleria La Reyna. 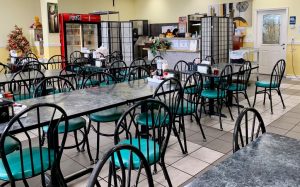 In short it’s an ideal marketplace for home chefs to work on experiments in VietnaMexican cuisine — for one, why not sprinkle Mexican-style chili lime peanuts over a bowl of pho or in spring roll dipping sauce? 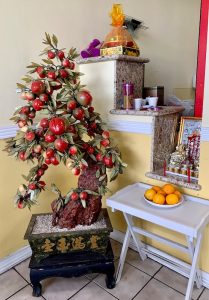