Founded in New York in 1967 by six people addicted to heroin, Phoenix House has grown to become the nation’s largest drug prevention organization. They have over 130 offices across ten states, including an outpatient and prevention services clinic in Houston. Three years ago, the organization’s Houston chapter began sponsoring an annual dinner for Spring Branch families centered on encouraging nightly family meals as a way of keeping teenagers off drugs and alcohol.

“The whole idea was to make parents aware that if you have dinner with your family, the chances of your kids using drugs in the future is much reduced,” said Juan Carlos Rangel, who works at Phoenix House and serves as a coordinator for the Coalition of Substance Abuse Prevention. Last year’s event drew 50 families; this year, 60 to 70 Spring Branch families were expected to join the dinner.

In addition to a catered Tex-Mex buffet dinner by Guadalajara Hacienda, the event featured a ventriloquist performance and an address by Fox 26 anchor José Griñan, who talked about the importance of communal dinners in his family growing up. Volunteer counselors also spoke to parents about how to have conversations with their children about drug abuse. “The main focus of the dinner is the message of family,” Rangel said. “Our mandate is to reduce the use of alcohol, marijuana, and prescription drugs among adolescents.” 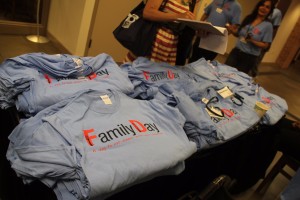 Last year, Phoenix House primarily invited families with children enrolled at Spring Branch ISD’s Landrum Middle School. This year, a large contingent have children at Ridgecrest Elementary, with the rest recruited from a selection of local apartment complexes. “It’s not a random selection,” Rangel explained. “We want to make sure we have a connection to them, so that we can later do a follow-up—how has this affected the family?”

To fund the event, Phoenix House relies on a substantial annual contribution from the Spring Branch Management District. “This couldn’t happen without the district,” Rangel said. “It takes a lot of money to feed 200 people, so their support has been pivotal to allowing us to put this on. Otherwise, we would have to do the dinner on a much smaller scale.”

In future years, Rangel said he hopes to expand from just one annual dinner to several across the district and the city, which would allow Phoenix House to get its message out to even more families. “The idea, for me, is to spread this around the whole Spring Branch area, especially through the churches,” Rangel said. “That’s the dream.”