While Covid-19 has thrown a wrench into their normal day-to-day operations, the Spring Branch District’s Pieper-Houston Electric remains busy — and performing to their normal high standards every step of the way. It’s the “Pieper Way.”

Despite the pandemic, additional schools, hospitals, shopping centers and residential developments continue to be planned.

And, as the industry is considered “essential,” Pieper employees have been able to continue working, said CEO George “Bud” Walters. “These men and ladies have worked through their fears and are performing very well and still staying safe.”

From large-scale design/build projects to small-scale maintenance jobs, Pieper-Houston Electric has a strong reputation built from more than 60+ years experience in the industry.

Started by Chuck Pieper as a small, family-owned residential contracting firm, George and Amy Walters purchased the firm in 1989 and it has grown into a full-service, fully insured commercial electrical contractor. 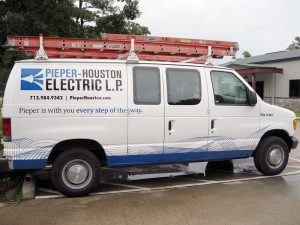 A challenge for the company has been finding qualified craftsmen, training them to be safe and instilling the “Pieper Way” for quality, Walters said.

Pieper just recently set up an ESOP (Employee Stock Ownership Plan), a plan by which a company’s capital stock is bought by its employees or workers, so it’s an exciting time to be part of the company.

More than 300 qualified Master, Journeyman and apprentice electricians work at Pieper-Houston. The company’s president, Rick Kloss, has been with the company for 30 years and is a Spring Branch High School graduate. Many “Pieper Players” are from the Spring Branch area.

“We have been involved in the Spring Branch area since our founding,” Walters said.

To celebrate their employees and clients and the greater community, Pieper hosts two major events each year, including a springtime American General Contractors BBQ and tent theme contest that draws more than 2,000 people.

Their second major event is Pieper’s Day with the Dynamo in late summer/early fall when the company brings clients and employee families to dine at Lucky’s, watch the Dynamo and then scrimmage on the Dynamo Pitch reffed by the official BBVA referees.

Like Kloss, many in the Pieper operations staff have been with Pieper-Houston for 30 years or more.

“We think that says a lot about Pieper and what kind of company we are,” said Maggie Barnes, marketing director. “We do consider ourselves a family.”

In consideration of measures aimed at stopping the spread of COVID-19, staffing of Spring Branch District offices is limited at least through May 31, 2021 while staff works remotely on a full-time basis. Staff may be contacted as follows: