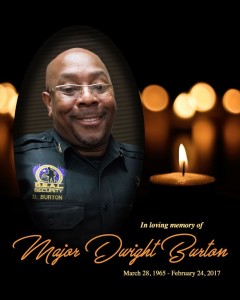 The Spring Branch Management District lost a beloved member of its team last week when Major Dwight Burton of S.E.A.L. Security Solutions died at the age of 52. Burton led the S.E.A.L. team, which has provided enhanced public safety services to the Spring Branch area for the past two years. A military veteran and a pastor, Burton was a common sight around Spring Branch in his S.E.A.L. uniform and patrol car. He regularly attended monthly meetings of the SBMD board of directors to provide updates on public safety in the district.

“It’s a huge loss for us,” said SBMD Deputy Executive Director Josh Hawes. “When we brought on S.E.A.L. in March 2015, he became our go-to guy. And he worked so hard; his only concern and interest was in making this area a safer place. He went above and beyond in doing that.”

Burton once responded to a call from a woman who was waiting at a bus stop with her child, Hawes remembered. “There were some not-so-pleasant people hanging around there, harassing her and asking for money. Major Burton parked his car and sat at the bus stop with her for about 20 minutes until she got on the bus.”

Burton had worked at S.E.A.L. for six years, said James Alexander, the company’s director of operations. After training to become a K9 officer, he quickly rose through company ranks to become a supervisor of private security officers in SBMD and other management districts in Harris County. “He wanted to be hands-on,” Alexander said. “If there was a problem in the district, he would make sure that he addressed it personally. He also built great relationships with the county attorney’s office and many of the board members of the management districts.”

One of those board members was SBMD’s Victor Alvarez. “He was extremely professional,” Alvarez recalled. “You would ask him something and he would say, ‘Let me look into it.’ And then he would just go and resolve the situation. Working with someone like that makes life easy.”

Burton also built strong relationships with business owners in the neighborhoods where he worked. “All the apartment managers absolutely loved him,” Hawes said. “They knew they could call him and he’d be out there, or would get somebody out there to help them. He would escort property managers when they had to do evictions with some shady people.”

For the past four months, Burton’s partner was Joseph Garza. When asked what he learned from Burton, Garza said, “Everything. The way he talked with people, the way he handled them. There was this one homeless kid we got a call about. We drove out there, and Major Burton just came out and talked to him, trying to reach out, see how he could help. It changed my way of looking at things.”

In addition to working at S.E.A.L., Burton was a pastor at the Church of Christ—a video of his final sermon can still be seen on his Facebook page. At last year’s Christmas party, Hawes met Burton’s wife for the first time. “She told me that his faith was very important to him. With all the bad stuff he saw, his faith gave him the strength to carry on.”