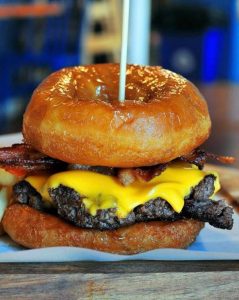 It starts off “simply” enough at Simply Greek in the Spring Branch District. The menu is divided into Simply Salads, Simply Pizzas and Simply Platters. It’s at Simply Greek Pitas when your choices get, well, a little involved.

There’s a traditional gyro pita and a grilled chicken pita but, if that’s too old-school Greek for you, maybe you would like to try the Gyro Philly Pita topped with grilled onions, peppers and melted American cheese.

What started out as the brick-and-mortar version of owner Terry Stamatakos’ food truck serving traditional Greek dishes is now home to not only Simply Greek but also Spring Branch Burger Shack and, most recently, Top Dog — all under one roof at 1900 Blalock Road. 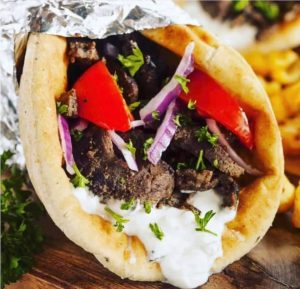 At the latest addition, Top Dog, the first thing on the menu isn’t even a hot dog but fries topped with, well, just about everything.

The hot dogs are all 100 percent beef and named after fictional comic book characters and superheroes. “Dr. Strange” is a dog topped with mashed potatoes and gravy. The “Hawkeye” dog features flaming hot Cheetos, peanut butter and Sriracha mayo.

The only thing really simple about the Simply Greek/Spring Branch Burger Shack/Top Dog enterprise is that you can get everything all in one place. Delivery is also available through a number of online platforms.

Not sure if you want breakfast, lunch or dinner? 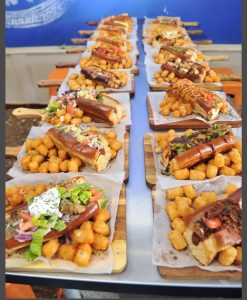 At the Burger Shack, which first opened at the current location of Cascabel vegan Mexican restaurant on Murray Bay Street before moving into the Simply Greek building, the menu includes a burger served between two glazed doughnuts with American cheese and bacon.

“The Burger Shack idea came because of our love of our cooking and creating specialty burgers that no one else does,” Stamatakos previously said.

Indeed, no one else does the “Clay Road,” a freshly grilled patty on an everything bagel topped with cream cheese, tomato and bacon.

The I-10 burger is the Blalock Road burger (beef with melted American cheese, bacon, lettuce, tomato and onion) turned upside down with a pepperoni pizza as the bottom bun.

Soon after opening the Burger Shack, Stamatakos said he had been talking with a local bakery to create some brioche hot dog buns.

Now we have Top Dog, and we can’t wait to see what Stamatakos thinks up next. We already know it will be simply unique.