The sporting life of 19th Century America is all but alien to modern observers. Baseball just started coming into its own as the national pastime toward the end of the century. Football was still evolving away from rugby and was primarily confined to elite colleges on the eastern seaboard, and James Naismith didn’t invent basketball until December of 1891.

Sports like boxing and horse racing were far more prominent nationally then than they are today, but among German Americans of that era, schützenverein were the name of the game. Or more accurately, the name of the clubs who played the game of competitive target shooting. (“Schützenverein” is German for “gun club.”)

Such clubs had their roots in Renaissance-era German city-states, and the custom of the societies came across the Atlantic to America.  Soon, wherever there were Germans in any numbers at all, there also were the schützenverein, along with the musical saengerbund (singing groups) and the gymnastic turnverein clubs. 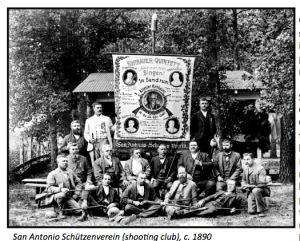 Starting with its 1876 founding, Spring Branch was one of several Houston-area communities that had its own schützenverein and its members competed amongst themselves and against rival German gun clubs from both Houston and Cypress and now-lost German farming communities like White Oak (centered on the St. John German Evangelical Lutheran Church on Mangum near W. 43rd) and Bear Creek, which originally stood in what is now the Addicks Reservoir.

Many of the actual schützenverein structures combined bar-room, social club and dancehall features and along with the churchhouse comprised the heart of the community, and its members would travel not only to compete against rival rifle teams, but also to march in the yearly Volksfest (German heritage festivals) in big cities like Galveston, San Antonio, and Houston.

These shooting matches were more than mere sporting competitions: held in late spring or high summer, they were often multi-day affairs for the whole family, with games for the children and women vying for blue ribbons in cooking competitions. And these being Germans at play, there was beer, and lots of it, to help wash down the barbecued beef and smoked sausage, and usually a brass band providing a boozy backbeat.  (At one 19th Century contest near Fredericksburg, the marksmen and their friends and families knocked back 140 kegs of beer in four days. Whether anyone hit a target or not is lost to history.) 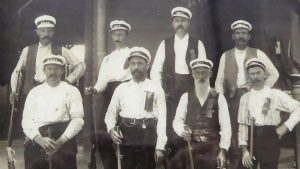 A complete account of a Spring Branch event survives online in the “Houston Notes” section of the Galveston Daily News of May 22, 1894. It was “one of the largest and most successful county picnics held in Harris County for years,” with “festivities and pleasures of every character.” Rifle teams from Bear Creek and White Oak competed against Spring Branch, and a large number of Houstonians turned out to swell both the audience numbers and contestants.

Seizing the opportunity to press the flesh, almost every elected county politico turned out, but, the writer notes, they were given no chance to harangue the masses: “There was no speech-making,” reads the account.

Spring Branch triumphed in both the team and individual competitions, thanks to the numerous bullseyes by Louis Kuhlman, which entitled him to coronation as King of the shoot. Lesser kings included Henry Curtin of White Oak and Henry Kruse of Bear Creek. There was only one mishap to mar the grand affair: Theodore Hillendahl, “a prominent citizen of Spring Branch,” was kicked twice by an ornery mule. While he was believed for a time to have been seriously injured, he had rallied by the end of the event. (And indeed lived on for another 37 years. He is buried not in the famous Hilldendahl Cemetery on Long Point, but in the Vollmer-Nieman graveyard hidden away in Timbergrove Manor.) 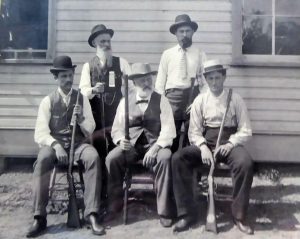 Accounts of other competitions read like a road map of Spring Branch: contestants included members of the pioneering Sauer, Beinhorn, Bauer, and Beinhorn families.

While many of the schuetzenverein died out amid the anti-German hysteria that gripped World War I America, and others were enveloped by encroaching suburbia since then (you can’t very well have an outdoor gun range in the middle of a modern big city), the tradition lives on in the German settlements such as Fredericksburg, Boerne, New Braunfels and smaller towns around the San Antonio area and in the Hill Country. Today, about 20 remain active in Texas where once there were about ten times that number.

Here are some videos of recent Texas competitions — you can see the rifles are quite peculiar.