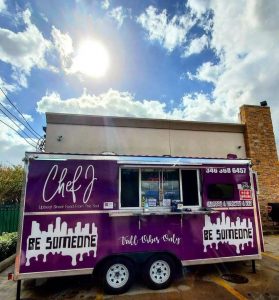 It all started with a pop-up tent at the corner of Neuens Road and Oak Tree Drive.

Well, maybe it started with a furlough. But, like Chef J, we’re going to be “upbeat” here and look at the present — and to the future — where your future could be loaded with juicy Mexican braised beef Birria and smoked brisket in, well, everything.

During a difficult time for even the most seasoned chef, husband and wife team Chef J and Melissa took their “achy breaky” pandemic hearts and poured them into a new food trailer located at 1860 Blalock Rd., where Chef J (Jonathan Breakey) serves up a menu featuring items like the aptly named “Achy Breakey Avocado Toast” and the “Clutch City Sandwich.”

Chef J calls his fare “upbeat street food from the soul” — something all of us could use right now.

The star of the show at the Chef J food trailer is the Birria, a dish from the Mexican state of Jalisco. It’s a meat stew traditionally made from goat, but in this case from beef. The dish is often served at celebratory occasions, such as weddings and baptisms, and holidays. 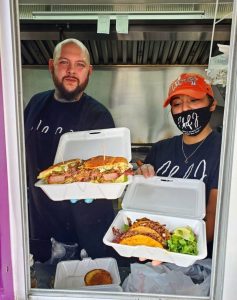 Any day you get a meal from Chef J’s food trailer is cause for celebration. Trust us. The grand opening in October kicked it off with a mariachi band and, ever since, Spring Branch residents have been dancing to the trailer and helping the chef sell out on a regular basis.

The pop-ups and the food trailer opening didn’t go off without a hitch, however. If you follow Chef J’s social media, you know he was visited by city officials on at least one occasion when he was doing his pop-ups on Neuens and, after he made it official with the city’s blessing at the trailer, had to shut down soon after because of an issue with the hood vent system.

Hopefully, all those hardships are behind the Chef J team now but, even in difficult times, they can be seen having fun serving up their delicious food at the corner of Blalock and Campbell in the Texaco parking lot.

On a recent weekend, you may have seen Chef J outside sitting in the rain on a chair, munching on some of his own food. You could almost hear “All By Myself” by Eric Carmen playing in the background, as one social media commenter pointed out.

That’s the precise day we decided to come visit, stopping first at another business featuring “J” in its name in the Spring Branch District,— 4J Brewing Company — to pick up some to-go cans to enjoy at home with our Birria tacos. 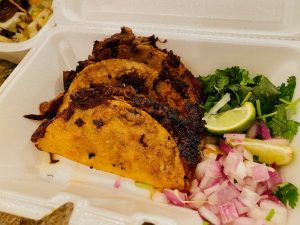 Don’t want to go home? Bring your food across the street from Chef J to another Spring Branch favorite, Cobble & Spoke. You can even order Chef J’s from your seat at the craft beer and wine bar and someone from the food trailer will walk it over.

On our visit, we sampled the Loaded Brisket Fries, the Brisket Fried Rice, the Clutch City Sandwich and, for some variety, the H-Town Hot Chicken Sandwich.

So, that’s about half the menu right there and not one of those items disappointed us.

The tacos were juicy as promised, with a consommé and salsa verde that was out of this world. The brisket fries were, in fact, “loaded” and perfect for sharing.

The fried rice featured not only the brisket, of course, but also a medley of veggies like corn, asparagus, red bell peppers and green onions. Clearly made fresh to order and tossed with Chef J’s stir-fry sauce and topped with a fried egg, the dish is worth a stop in itself. We will also be returning to try the Barrio Ramen. 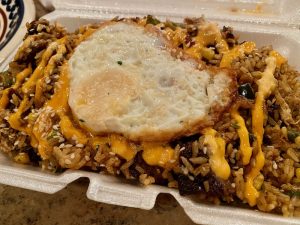 Our group fought over the H-Town Hot Chicken Sandwich topped with chipotle slaw and guajillo aioli and served on a toasted brioche bun. It’s the only thing that can possibly compete with the savory Birria at this trailer.

Chef J isn’t kidding when he advises: “Come hungry because you will definitely leave full.”

We would also like to add you will definitely leave “upbeat,” just as his tag line promises, and with a happy soul (and stomach).