Around 9 p.m. one December evening in downtown Houston, a work crew lifted an enormous steel sculpture—16 feet high and 30 feet wide—into the bed of an 18-wheeler. The sculpture, an angular abstract work called “High Plains Drifter,” was then driven about 15 minutes down I-10 to its new home: Agnes Moffitt Park.

“High Plains Drifter” has an impressive pedigree. In the early 1970s, the developers of the Allen Center office complex asked the Museum of Fine Arts, Houston to help select a work of art for its downtown plaza. The MFAH turned to Clement Greenberg, one of America’s most prominent art critics, who put together a panel of six artists, each given $1,000 to produce a model of their proposed sculpture. The winner of the $30,000 project grant was well-known abstract sculptor Peter Reginato.

Because Reginato’s proposed sculpture was too big for his own studio, it was fabricated in Bennington, Vermont and driven down to be installed at 333 Clay Street in Houston. There it stood until last year, when Two Allen Center Co. decided to donate it to the city.

The timing was fortunate. Houston city council member Brenda Stardig, who represents District A, had been lobbying the city for years to place public art in her district. “I’ve been trying to get civic art in Spring Branch since 2010, because there just wasn’t any here,” Stardig said. “A lot of attention goes to the inner loop. So when the parks department approached me and asked if I was interested in the sculpture, I said, ‘Absolutely!’” 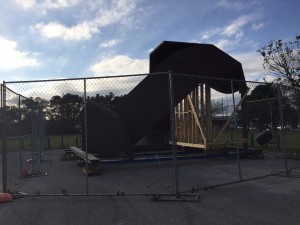 Joe Turner, the director of the Houston Parks and Recreation Department, said he immediately thought of Council Member Stardig when he learned that “High Plains Drifter” was being donated to the city. “Our role was to find a location for the donation,” Turner said. “And since the Spring Branch area had not received public art, we felt that it was a good match. Especially since Council Member Stardig was in favor of the installation.”

Stardig liked “High Plains Drifter” as soon as she saw it. “It’s got a real presence,” she said. “Every time you look at it from a different angle, you see something different. And the material sort of matches our neighborhood. We’ve traditionally been a working-class area, and it has that metal, that toughness to it.”

Because the sculpture was donated to the city, no taxpayer money was spent to acquire it. Funds to move the sculpture from downtown to Spring Branch were provided by Stardig’s office and Two Allen Center Co. It currently sits in a corner of the parking lot at Agnes Moffitt Park while a pedestal, pedestrian path, and lighting display are being installed. Once the sculpture is placed in its permanent spot, Stardig plans to hold a public ceremony to mark the occasion.

She said she hopes that “High Plains Drifter” is just the first of many works of civic art in Spring Branch. “There are so many young people here, and they don’t necessarily get outside of their neighborhood to be exposed to all the art that is available inside the loop,” she said. “We’re a city of 644 square miles, and we should have art in all of our districts.”