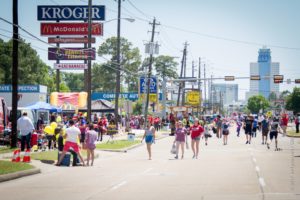 On Sunday afternoon, police cars blocked off a stretch of Gessner Road between Tiger Trail and Kempwood for the latest edition of Cigna Sunday Streets, a special event produced by the mayor’s office and a favorite for neighborhoods around the city. With the streets closed to automobile traffic, hundreds of Spring Branch pedestrians, bicyclists, and rollerskaters came out to enjoy the unseasonably cool weather.

Dozens of tented booths from local organizations and businesses lined both sides of Gessner, offering food and drinks, arts and crafts, and even free massages. In front of Spring Woods High School, a group of Terrace Elementary School students offered to paint visitors’ faces with glitter for a dollar. Mini tennis courts were set up in the parking lot of El Gallo Restaurant. A Pedal Party bus blared Backstreet Boys songs as it made its way up and down the street. A group of colorfully costumed Bolivian dancers showed off their moves.

“It’s neat to walk down a street that you normally drive down,” said Mo Regev, who was accompanied by her two daughters. “It gives you a whole new perspective.”

Further down the street, children crowded around a group of terrariums containing a Mexican Black Kingsnake, a Cornsnake, and a Ball Python (among other reptiles), provided by Spring Branch business Wayne’s World of Snakes. Across the street, a three-piece rock band called Rio Yeti played for an appreciative crowd. Jordan Leason, a trainer at the Houston Strength gym, offered to measure visitors’ vertical leap and body mass index. 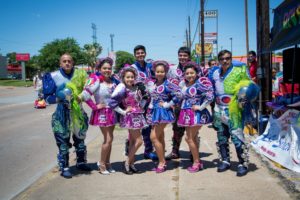 Houston City Councilmember Brenda Stardig could be seen chatting with constituents at her own booth on the corner of Gessner and Kempwood. “We’ve been very blessed,” Stardig said. “I think Spring Branch ordered perfect weather today. Everyone I’ve talked to as I rode my bike up and down the street has been very impressed with the whole event.”

Oscar and Morella Revollar brought their two young children, who had dismounted from their bicycles but were still wearing their helmets. “I work at Westwood Elementary just down the road, and I see my students out here,” Morella said. “They’re out with their families; they’re getting exercise. They’re not inside playing video games. They should do this at least once a year.”

Oscar nodded his head in agreement. “This is the best experience I’ve had in this area. I love it.”

Founded in 2014, Cigna Sunday Streets is a citywide initiative to promote exercise and improve the health of Houstonians. Events are held periodically in different parts of the city, with the next in the Brays Oaks neighborhood on May 21. According to the city, participants in the events average 70 minutes of physical activity over the course of the afternoon, and 89 percent of visitors have a more positive feeling about the city after attending. Previous events have taken place in Montrose, the Heights, the Energy Corridor, and Garden Oaks.