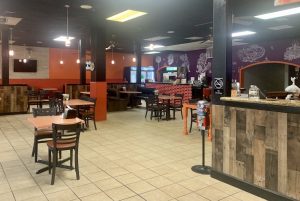 Necessity is the mother of invention, no less in a restaurant kitchen than anywhere else. So Violeta Villarreal found out in 2001 when she opened Tacos del Julio, the first American outpost of a Monterrey-based chain specializing in the fare of northern Mexico.

Back home, their specialty was tacos al trompo — pastor-style pork cooked on a rotating vertical spit over flame, Middle Eastern style. The Harris County Health Department had other plans — such a method for cooking pork is not allowed. And so was born the beef taco del trompo, today Tacos del Julio’s signature dish.

That’s one of several dishes I have enjoyed at the Long Point restaurant, located in the under-renovation strip center between Wirt and Pech on the south side of the street: let Carter Ernst’s patchwork dog sculpture Pointing be your beacon for a turn-in, as the restaurant sign is hard to see from the street and the restaurant itself is set well back from Long Point. 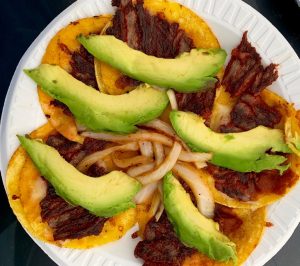 Beef al trompo is just one of Tacos del Julio’s innovations. Another they started long ago is that instead of chips and salsa, diners here get as a gratis starter a cup of tasty, soup-like, bacon-flecked charro beans. You can also get pork al pastor trompo-style here too, albeit not cooked in traditional Mexican style due to health regulations.

While the restaurant does offer a pandemic special of a takeaway Tex-Mex-style beef/chicken/shrimp fajita mound with all the trimmings, I’ve always found it best to play to a restaurant’s strengths, and here that is the food of the northern states of Coahuila, Nuevo Leon, Tamaulipas, Zacatecas and San Luis Potosi — the stuff you might find in big cities like Saltillo and Monterrey.

I highly recommend the tacos Tlaquepaque, a Monterrey specialty in spite of the fact that they bear the name of a city in the state Jalisco. (Where, I understand, you can’t get tacos Tlaquepaque.) These are yellow corn tortillas topped with beef barbacoa and then lavished in a deep reddish-brown sauce — you use so much of the sauce, the tacos wind up looking more like tiny enchiladas. Composed of a mix of chiles and a little coffee and chocolate, the sumptuous flavor resembles that of a slightly spicy mole.

Another unusual feature at Tacos del Julio is the guacamole. As per north Mexican tradition, it is served in its component parts — mashed (extremely fresh and tasty) avocados separate from tomato, white onion, and diced jalapeño — leaving the exact composition of mixture up to each diner according to their taste. And it comes to you looking like a Mexican tricolor. Cool, eh? 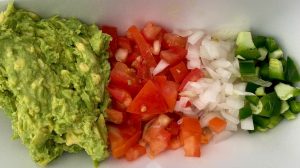 In addition to the Tex-Mex to-go boxes, more authentic takeaways are also on offer, such as the “Monterrey 400” dinner: $14.50 gets you a pound of meat along with tortillas and trimmings, including melted asadero cheese, a.k.a. “quesadilla cheese.” Their micheladas draw raves as a hangover cure alongside pozole and menudo, and I know there are some mollejas fans out there — Tacos del Julio has these chicken sweetbread tacos available, though they were out on the evening of my visit. Maybe they won’t be on my next, because I shall return to the restaurant whose translated Spanish slogan is most apt for our times: “Don’t feed your anxieties, eat tacos instead.”