Meeting in Buff Burger’s Spring Branch office and commissary kitchen, I carved out time from Sara Burden’s fast-paced behind-the-scenes schedule to talk about how her business got started. Sara and her husband Paul, who goes by “Buff,” are the owners and operators of Houston’s three Buff Burger locations, focused on providing fine dining quality burgers in a fast-casual setting.

Sara and Buff’s paths intersected years ago in the mountains of Colorado, as ski instructors. The couple never imagined that one day they would be blazing a different kind of trail in the Texas restaurant industry. When they decided to take their adventures from Colorado to New Zealand for a six-month trip, “We skied and traveled the whole time, and we also ate a lot of gourmet burgers,” says Sara. It was the concept of local ingredients used for a high-quality meal that impressed itself upon Sara and Buff. When they returned to the United States, ready for a new adventure, they brought with them the idea of a Texas version of the gourmet burgers they enjoyed overseas.

“Both England and New Zealand are big on using local products,” says Sara. “We loved the idea and decided to find as many local products as possible, and keep it all in Texas,” something that they have maintained over the past four years of being in business.

“Our beef is from 44 Farms in Cameron, Texas, and our goat cheese is from Dripping Springs,” says Sara. “44 Farms is where fine dining restaurants get their steaks. We’re getting our ground beef from the same cows being used for expensive tomahawks. It makes a huge difference.” Buff Burger is proudly a part of what is called the “never ever” program, meaning that their beef never contains any antibiotics, fillers, or hormones; it’s purely beef, delivered every couple days so that it does not need to be frozen.

Their Spring Branch location became the first Buff Burger to open in 2015. “I grew up in the area, so we’re very familiar with Spring Branch. We wanted Buff Burger to be along the I-10 corridor between 610 and the beltway,” explains Sara. “This was the best spot that was available. The area was growing, and we’ve done way better than we expected because of the location.” Buff Burger has proven to be a convenient spot for business lunches, drawing people from the Energy Corridor, Westchase, and even downtown.

However, Sara and Buff also wanted to provide hand-crafted burgers even more conveniently to Houstonians living inside the 610 loop. “The person who owns the facility in Montrose had been eating at Buff Burger in Spring Branch, so when there was an opening in his building, he called us to see if we were interested in moving in,” says Sara. So, in 2018, Buff Burger opened its second location in Montrose. The new Westchase location on Westheimer was soon to follow, opening its doors in January of 2019. 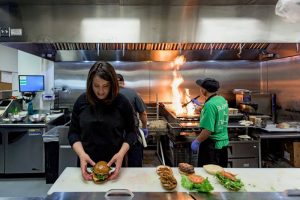 Buff himself develops the recipes used at all Buff Burger locations, working with the chefs and tweaking the recipes to see what works best, especially for the large amounts needed. The restaurant’s distinctive baked buns, house-made mayo, and aioli are prepared from scratch in their commissary kitchen, which is the source of all foods provided to each Buff Burger location.

The newest development out of Buff’s kitchen is homemade ice cream, used in the shakes at the Spring Branch location and in the “boozy shakes” soon to arrive at the Westchase and Montrose locations. He also introduced hand-made tater tots, something rarely seen. “As far as I know, we’re the only burger restaurant in the city that makes everything in-house,” says Sara.

On top of the lunch and dinner demand at their three restaurants, Sara and Buff have taken on what Sara describes as an exciting new aspect of their business: catering. With the commissary kitchen running at full-steam, Buff Burger is able to provide large orders that just were not possible to fill in the past. “The other week, we made 200 burgers for an office,” Sara says. With catering ramping up as businesses see the opportunity to provide hand-crafted burgers for their employees, Buff Burger is ready to meet the demand, while accommodating special requests that customers may prefer.

Underneath the excitement of day-to-day operations, recipe-making, ordering, and delivering, Sara states that her favorite part of her business is still customer service. “I love taking orders and running the dining room. I get excited when people try our food for the first time and love it. You’re putting yourself out there, so you really hope that people do end up loving it.”