The City of Houston welcomes the amazing Shanghai exhibit 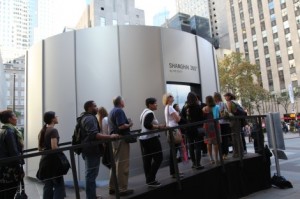 In an effort to renew comprehensive city-to-city ties between Houston and Shanghai, Mayor Annise Parker announced the signing of a Memorandum of Understanding (MOU) with Shanghai government city officials. The MOU is an agreement to display promotional videos from each of the partner cities for a year at strategic locations and on social media.

The MOU came just as executives from The Information Office of Shanghai Municipality, Houston First, Rice University, Houston Independent School District and Simon embark on a new chapter to encourage joint city promotion through the opening of the Amazing Shanghai Exhibit in Houston.

Rice University’s Baker Institute for Public Policy hosted the reception in honor of the opening of The Amazing Shanghai Exhibit, which displayed the exciting connections between Houston and Shanghai throughout our city for five days beginning on October 23, 2014.

“Houston and Shanghai have built a strong, flexible and modern partnership based on dynamic business centers and thriving cultural capitals,” said Mayor Parker. “Houston offers business communities that are substantially interconnected, leading ports that are open to international trade, centers of learning for students from all over the world, yet there is more we can do to make our citizens aware of the tremendous opportunities each city offers the other.”

The Memorandum for mutual city promotion will guide a year of daily exchanges and joint promotion beginning on January 1, 2015. The City of Shanghai agrees to place Houston’s city promotion video at strategic locations throughout Shanghai and on certain social media, and Houston agrees to do the same for Shanghai.

The Amazing Shanghai exhibit features the Amazing Shanghai Pavilion, which will be erected for five days in the Houston Galleria, a photo exhibit displayed at Rice University and a book donation to Houston Public Library System. The City of Houston commends Houston First, Rice University, Simon, Sueba, byejoe, Houston Trade Center and Sun’s Wholesale Club for their support of this cultural exhibit.