The Craft of Brewing in Spring Branch 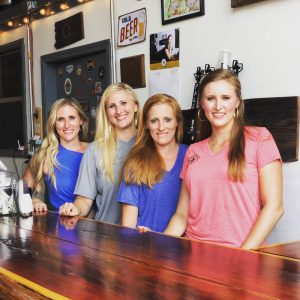 Long before 4J Brewing Company was founded, sisters Jessica, Jackie, Joanna, and Jennifer were making home brewed beer in Spring Branch under the guidance of their father, Larry Edwards. “It was our dad-daughter time at the beginning. He taught us how to home brew. We took that and ran with it, making it a business rather than a hobby,” explains Jennifer, co-owner of the brewery.

Jennifer shares ownership with her mother Marilyn, and together they maintain their mission to “make beers that are easy to drink, have a lot more flavor, and higher alcohol content” than traditional brews. In business for just over a year now, 4J has become a popular spot for locals and out-of-towners alike to grab one of their five specialties: an IPA, Amber, Pale Ale, Blonde, or a Stout, as well as seasonal brews such as the Peach IPA currently on tap this summer. 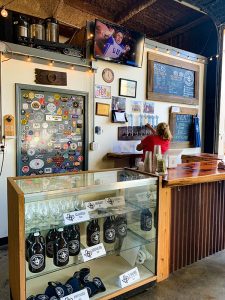 Jennifer emphasizes that 4J is both 100% woman-owned, but also 100% inspired by her father, who can be seen supporting the brewery in many different capacities, along with her three sisters who help out on the weekends. “Dad is our taste tester, and he does a lot of repair work and maintenance around the brewery. He’s usually walking around talking to people here. He’s the man of the hour. Sometimes we have to kick him out so we can all go home,” laughs Jennifer. “He loves that we started this business as much as we do.”

If you’re lucky enough to run into Larry around town, you may be granted his signature 4J business card, which reads “First Beer On Me” printed in large letters on one side. The other side is marked with the 4J logo, which cleverly combines the 4 and the J into one seamless design, overlaid on a Texas outline. “We’ve given him a limit on how many cards he can give out,” Jennifer smiles as she points out.

“My family is born and raised in Spring Branch,” says Jennifer. “For us, it’s not just about the beer,” she continues. “We love being part of this community, and giving back.” 4J has become a natural venue for hosting a number of events in the Spring Branch area while partnering with local organizations. “I see this as a platform for building community; that’s one of my favorite parts of the business,” says Jennifer. 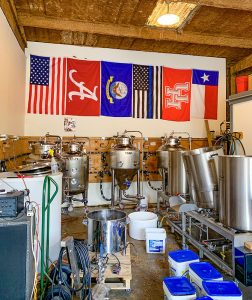 4J has partnered with the fitness non-profit “We Are One” which offers workouts while accepting donations to help pay expensive medical bills. They have partnered with the nearby non-profit Memorial Assistance Ministries, hosted school supply drives, holiday gift drives, pet adoption days, and more.

“It’s always awesome, and interesting how people find us,” adds Jennifer. The Houston Ladies of Craft Beer is one local group that recently paid a visit to 4J as part of their monthly exploration of Houston’s craft beer scene. “When we started this group more than 5 years ago, there wasn’t another group geared toward women who love craft beer,” says Erin Healy, the group’s current organizer. They wound up at 4J in June, after deciding to follow a Houston craft brewery “beer crawl” calendar, which highlights a different brewery each month.

The calendar represented support for the proposed, and now passed, “Sunset Bill” legislation which now allows Texas customers to purchase packs of beer straight from breweries. The Sunset Bill, and a change by the Texas Alcoholic Beverage Commission which ended the requirement for special (cumbersome) labels for Texas beers have made the lives of brewers much easier in recent years. 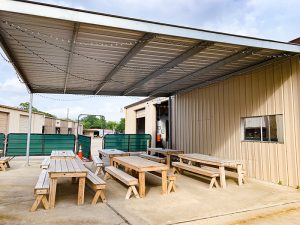 These changes have played a part in the craft beer boom in Houston. “When St. Arnold started 25 years ago, there were only a handful of craft breweries in Houston, and now there are over 60 of varying sizes,” says Healy. “It’s a great community of people,” she adds.

“Houston Ladies of Craft Beer have become great friends over the years. Many of us are involved in the brewery business, or have family members who are. One of us started a brewery in Katy, and another one is starting one in Scotland. And some of us just brew in our backyards,” says Erin. The group meets at local, independently owned breweries once a month, on Thursdays. For those who want to talk craft beer while drinking craft beer, check out their Facebook page for the next location.

On their Thursday visit to 4J, the ladies were able to pick up food from outside of the brewery to bring in and accompany their drinks. Food vendors come to 4J on Fridays and Saturdays, during which customers are asked not to bring in outside food. The brewery has expanded its hours to be open 3 days per week, and doubtlessly will continue to grow. “Brewing has been my hobby for years and years,” says Larry. “It’s been fun to see what it’s become. It’s truly amazing,” he adds. And what the taste-tester says, we can’t argue with. 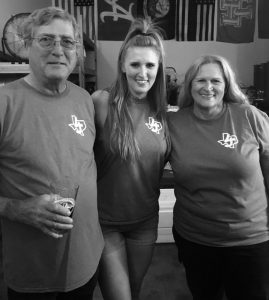