Skip to content
Home » News » Thrive+: Out of the Shark Tank and ‘Thriving’ in the Spring Branch District
Previous Next

Thrive+: Out of the Shark Tank and ‘Thriving’ in the Spring Branch District

You may remember him from ABC’s Shark Tank, where he pitched his product earlier this year. Houston area native Brooks Powell, founder of Thrive+ Health Inc., has a product he says mitigates the negative effects of alcohol. It works by reducing short-term alcohol withdrawal, replacing lost vitamins, and providing your liver with what it needs to break down alcohol and its toxic by-products.

While the sharks didn’t bite on Shark Tank, Powell said his business is, well, “thriving.” Thrive+ now has offices in The Cannon co-working environment, located in the Spring Branch Management District, and Brooks plans to expand there. He is now hiring.

Powell recently did a Q&A with the SBMD:

SBMD: How did Thrive+ come to being a member of The Cannon?

Powell: For a period of about two years we actually had our office at Princeton University’s “eHub,” where we were participating in their summer and semester eLab programs. Upon our graduation from Princeton and having to leave the eHub, which is only for students, we decided to move to Houston to set up our HQ. The majority of our management team was from Houston, and we knew we’d have a network in Houston and that it would be the best city for us to make our dollars stretch the furthest. We originally set up shop at WorkFlourish, which was on the first floor of our apartment building. It was great, and we highly recommend it. However, knowing we’d need to make fresh hires soon, we decided to expand to The Cannon, where there was a much larger and further built out entrepreneurial community. We’ve been super happy being part of The Cannon’s community.

SBMD: When was Thrive+ created? Please give me a little bit of background on the product and how/why you founded it.

Powell: I started Thrive+ upon reading the first major research publication on DHM, the main molecule in our product, which came out in 2012 while I was a sophomore at Princeton. With the help of a Princeton neuroscience professor, a Princeton alumnus who specializes in chemical patent law, and a pharmaceutical manufacturer, we became the primary company in the United States commercializing DHM for human consumption. While I’m good at science, the real experts are our R&D team and scientific advisors.

SBMD: I keep reading it’s NOT a “hangover cure.” So, what is it? What is the science behind it?

Powell: DHM is a molecule extracted from the Hovenia Dulcis plant. Kind of like how caffeine can be extracted from coffee, or THC from marijuana, DHM, primarily discovered in 2012, is shaped like a benzodiazepine and binds to the same brain receptor that alcohol binds to. By doing so, DHM reduces short-term alcohol withdrawal — the main reason people don’t feel good the day following alcohol consumption. DHM is also an extremely strong antioxidant and helps aid in the metabolization of alcohol. In a number of studies, animals treated with DHM showed significantly reduced liver damage in relation to alcohol and other toxicants. What’s so interesting about DHM is that the way that DHM works to reduce hangovers actually theoretically puts users at less risk for developing addiction. Proven in multiple animal studies, we’re hoping to spearhead one of the first human studies in this regards.

Basically, if you’re going to drink alcohol (whether one drink or six), you’d be crazy not to take Thrive+ afterward! Healthier liver? Feel better the next day? Just three capsules after your last drink? Sign me up. 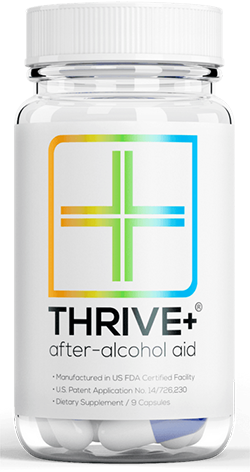 SBMD: Who is your customer?

Powell: Our customers are not college students or binge drinkers. In fact, less than 5 percent of our revenue comes from people under the age of 25. Our customers are people who like to enjoy alcohol — 50 percent+ of the U.S. population — but are looking for a way to do that in a healthier and happier way, that even makes them feel better the next day. Basically, we’re trying to make the moderate consumption of alcohol a healthier, safer and all-around better experience.

SBMD: Do you see a continued presence for Thrive+ at The Cannon and/or in Spring Branch?

Powell: Hell yeah! The Cannon is starting to pre-lease office space (for its new building), and we just planned out a 20+ person office with areas to expand. So, unless we can’t hire the talent we want here in Houston and we have to move to NYC or something, then we’re going to expand like crazy here in Houston with The Cannon as our home base! Yes, we’re hiring. Please apply if you’re in marketing or analytics.

SBMD: Some of our readers may have seen you on Shark Tank. What did you learn from that experience and how has the product/company evolved since then?

Powell: Basically, I’d say that I learned that getting on TV is a lot of work. Shark Tank helped us a ton, but nothing has helped our business as much as actually rolling up our sleeves and building the company from the ground up. The business is still the same business you saw on the show — just about 5 times bigger.

To learn more about The Cannon, located in the SBMD, visit https://thecannonhouston.com