The National Weather Service (NWS) issued a flash flood warning for parts of central Texas on Thursday morning and placed most of the state on a flash flood watch due to a slow-moving storm system expected to linger through the weekend. Thousands of people have evacuated their homes in low-lying areas, as rivers swell to levels not seen in more than 100 years and emergency workers complete hundreds of high-water rescues.

Wednesday’s storms targeted north of Houston, where a six-inch downpour in just three hours led to flash flooding. Further north in Lubbock, TX it was a similar scene, where drivers slogged through washed-out streets. Evacuations were ordered for parts of two towns in Fort Bend County, about 30 miles southwest of Houston, where the Brazos River has risen to levels not seen for more than a century.

Texas Gov. Greg Abbott declared a state of disaster in 31 counties due to the flooding, mobilizing state resources necessary to cope with this disaster. As much as 10 inches of rain could fall in the Houston area in the coming days, just weeks after eight people were killed in floods that hit the metro area. 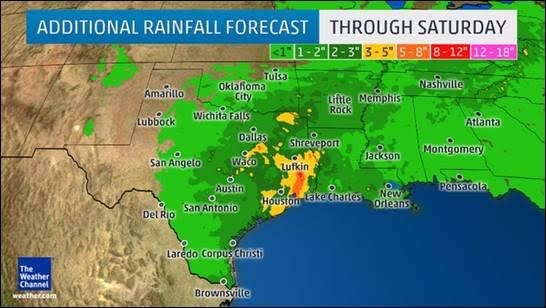 Another round of significant rain for beleaguered Texas next week.

Hundreds of Red Cross volunteers from all over the country are in Texas, operating shelters, providing meals, helping assess the damage and distributing relief supplies. On Wednesday 17 shelters were open throughout the Lone Star state, helping to provide a safe place to stay for more than 140 impacted residents.

Within shelters and from emergency response vehicles circulating impacted areas, individuals and families are able to access water, hot meals and relief supplies including tarps, mops, bug spray, bleach, gloves and face masks. The Red Cross deployed 22 emergency response vehicles to help and six more are on the way to Texas. Partner organizations like the Southern Baptist Disaster Relief and Salvation Army are also supporting efforts to provide feeding in shelters and along mobile routes.

Red Cross mental health workers are helping people cope, many of whom have been hit with flood damage more than once this spring. Health workers are assisting with minor first aid needs and helping replace things like lost medications and eyeglasses. Red Cross caseworkers are meeting with families one-on-one to help them get the help they need.

Disaster teams are working around the clock to provide hope and help for those in need. With four feet of water lapping at their door, Maria Esquivel of Rosenberg and her family left their home and sought refuge at a Red Cross shelter in Fort Bend. At the shelter, she, along with her husband, son, daughter and grandchildren, have found a safe, dry place to stay until they are able to return home.

“We have family in San Antonio but want to be able to get back in the house to clean up as soon as the water recedes,” Esquivel explained.

The family lost everything except for five sets of clothing that they were able to get as they evacuated, including her husband’s car. The Red Cross is helping hundreds of families like Maria’s across Texas as the floodwaters continue to rise and more families are forced to leave everything behind.

Texans are bracing for another round of significant rainfall and severe flooding today and into the weekend. The Red Cross will remain in already impacted communities to address immediate needs and help individuals and families create recovery plans for the road ahead. And in preparation for additional and detrimental rainfall, Red Cross disaster teams are closely monitoring weather patterns and preparing possible shelter locations and supplies in at-risk counties.

The Red Cross encourages everyone, especially those in at-risk areas, to re-visit their family’s emergency plan and review preparedness information for various disasters at RedCross.org/prepare. People in the path of these storms are also encouraged to download the free Red Cross Emergency App to have safety information, severe weather alerts and shelter locations available on their mobile device. Red Cross apps are available in smartphone app stores by searching for the American Red Cross or going to RedCross.org/apps.

With the threat of more flooding in Texas this week, below and available on RedCross.org/prepare are a few steps people should follow to remain safe:

• Be prepared to evacuate at a moment’s notice and heed evacuation orders when given. When a flood or flash flood warning is issued for your area, head for higher ground and stay there.
• Stay away from floodwaters.
• If you come upon a flooded road while driving, turn around and go another way. If you are caught on a flooded road and waters are rising rapidly around you, get out of the car quickly and move to higher ground. Most cars can be swept away by less than two feet of moving water.
• Keep children out of the water.
• Be especially cautious at night when it is harder to recognize flood danger.