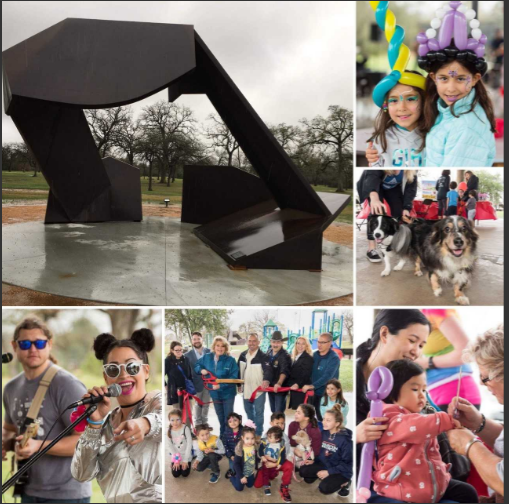 An evaluation of the city’s Civic Art Program initiated by Mayor Sylvester Turner in 2016 pinpointed districts that lacked civic art. The evaluation led to the sculpture being relocated away from downtown.

“Every part of the city should be to enjoy civic art right where people live,” the mayor said.

The dynamic artwork subsequently was donated to the City by Brookfield Properties. It was moved to the District A park after more than a year of site planning and preparation.

Reginato is an abstract sculptor and painter. Born in Dallas, he grew up in the hills outside Oakland, CA and attended the San Francisco Art Institute. He began making abstract sculpture in 1965 and moved to New York City in 1966 to pursue his career as a sculptor. His work can be found in collections of the Metropolitan Museum of Art, the Mint Museum of Art, Charlotte, the Museum of Fine Arts, Boston, the Museum of Fine Arts, Houston, The Hirshhorn Museum, and the Smithsonian Institution.

In 1999, the City of Houston established an ordinance mandating that 1.75% of qualified Capital Improvement Project monies be set aside for civic art. The program is managed by the Mayor’s Office of Cultural Affairs. For more information about the City’s Cultural Programs go to www.houstontx.gov/culturalaffairs or follow the Mayor’s Office of Cultural Affairs on Facebook @HoustonMOCA.