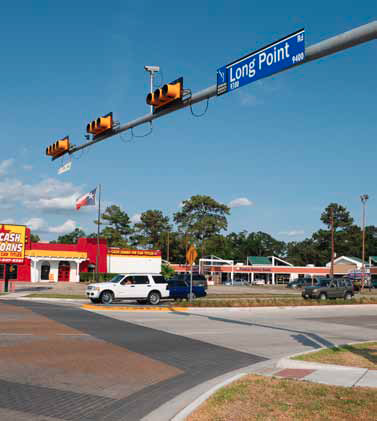 Improvements to major thoroughfares throughout Spring Branch are continuing according to plan, said Mahmoud Salehi, a principal in the firm CobbFendley & Associates responsible for engineering many of the projects. The project that stretches along Long Point, from Hollister to Pech Road, was successfully bid by Robert Conrad Construction in August.

Other intersections throughout the District are also part of the ongoing improvements and modernization, he added, with the City of Houston installing newer traffic signals and constructing ramps to bring them up to ADA standards. These safety and mobility improvement projects are happening at Clay at Gessner, Kempwood at Blalock, Bingle at Long Point, and Blalock at Wirt.

Designs for new bus shelters have been submitted to the appropriate committee by landscape architects Kudela & Weinheimer and are under review. The comprehensive study of the Spring Branch District is continuing, with Task II completed at a workshop with the board of directors in late November. “We’ve discussed the mobility issues and drainage and quality of life, land use, open space, parks and economic development,” Salehi said. “We are now beyond the visioning portion. Task Two was information gathering. And now we’re talking about how to improve what we have, how to create connectivity, and planning for the next 20 to 30 years.”

Salehi said another meeting to discuss Task III is likely to take place in late January or early February, adding that the input from interviews with Super Neighborhood groups, the police department, Spring Branch ISD, and local politicians will play an important part. Task IV of the four-part study will be completed by the end of summer, 2014