Motorists driving through Spring Branch will soon have another reason to keep their eyes on the road. In coming weeks, landscaping crews will fan out across the district to begin work on 14 new esplanades—the grassy medians that run along the middle of roadways—that have been adopted by the Spring Branch Management District as part of its ongoing beautification and neighborhood improvement program. 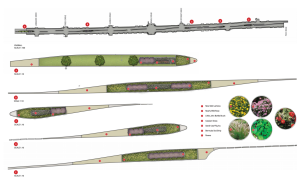 “We get a lot of calls from people asking when we’re going to put in more esplanades, so it’s very exciting to start construction on the next group of them.” said Spring Branch Management District Director of Services Josh Hawes. “The number one question I get is, ‘When are you going to do an esplanade in my area?’”

“If you go down Blalock, you can see the esplanades we’ve done,” said David Schwab, the chair of the district’s environmental and urban design committee. “Now we’ve adopted 14 more, and they’re going to become the standard that we want to spread across the district—we want to adopt as many more as we can.”

“A few of the other esplanades in the district were pretty heavily impacted by the intense rains we’ve been having over the past year,” Bruner said. “What the management district wanted us to do was to make the design a bit more weather-proof with respect to maintenance. We want these esplanades to stand up for a long time.”

To mitigate flood damage, SWA built in grassy buffers between the curbs and the plantings to absorb any water sprayed by passing cars. To prevent runoff from going into the street, it minimized the use of impermeable “hardscape” elements like paving stones. “The flood problem is hard to avoid,” Bruner said, “but we tried to come up with plants that will work in the harsh conditions that you have in the medians, surrounded by roadway traffic.”

The plants SWA ultimately selected include New Gold Lantana, Nearly Wild Rose, Little John Bottle Brush, and Sandi-Leaf Fig Ivy; for grass, they chose Bermuda sod. “There were a lot of plants that just weren’t legible at roadway speed, so we chose plants that have a bit more color and vitality,” Bruner explained.

As part of the City of Houston’s Adopt-an-Esplanade Program, the city will provide free water for the esplanades’ sprinklers in exchange for the management district assuming responsibility for upkeep and maintenance. SWA designed the esplanades in compliance with the city’s written guidelines, which mandate that landscaping can’t block drivers’ lines of sight at intersections. Three miles of the project have already been completed.

Given the scope, Bruner expects the new esplanades to get a lot of attention—from locals and outsiders alike. “This project is going to make a pretty big impact,” he said. “It’s definitely a public improvement that people will take notice of.”