Public art visionary takes his mission to Spring Branch and beyond 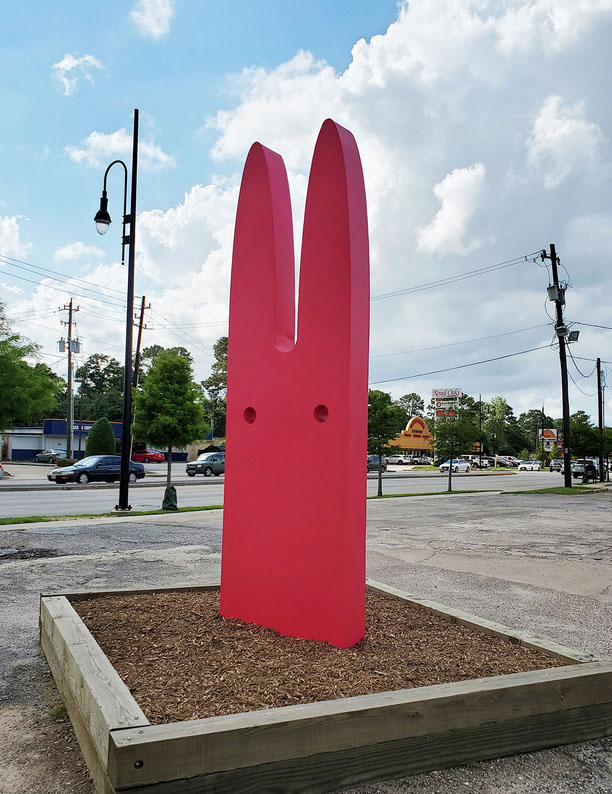 Amid the trees lining the Heights Boulevard median, three brightly-colored people seesaw atop a three-story house. A few miles to the west on Long Point Road in Spring Branch, a raspberry-red bunny pops out of a parking lot, its ears the only giveaway of its identity.

No, you’re not seeing things. These imaginative sculptures are part of several public art installations across Houston staged by Gus Kopriva, owner of Redbud Gallery in the Heights. Thanks to him, art in the city lives more often outside the confines of mainstays like the Menil Collection and the Museum of Fine Arts Houston.

Since his first major outdoor project in 2014, which included a massive hourglass and a house perched atop oars in the Heights, Kopriva has supervised rotating installations on Heights Boulevard, on Long Point Road  for the Spring Branch Management District and Richmond Avenue near the Galleria for St. George Place Redevelopment Authority/ TIRZ 1.

Kopriva’s goal is to establish Houston as a destination for the arts.

“I think sculpture scattered all over the city will help achieve that [goal],” Kopriva said.

Born in Germany and originally a stranger to the art world, Kopriva married an American artist he met in high school, Sharon Capri. He gives credit to Sharon for sparking his interest in art, which grew into a passion over time. 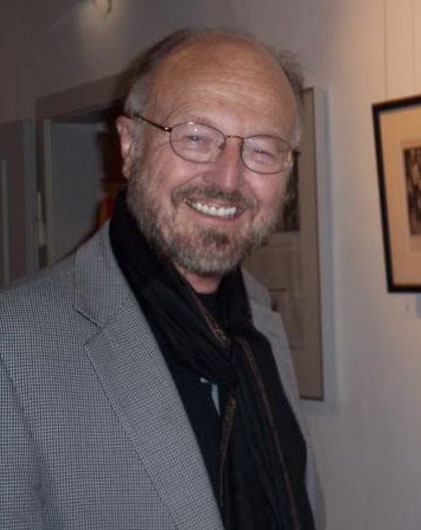 “Every course she took [in college], I read the books,” Kopriva said.

Kopriva didn’t obtain an arts degree and went to work instead as an engineer. His career helped him fund his affection for collecting, curating, buying, and selling art.

That affection finally found a brick-and-mortar home in 1999 when Kopriva opened Redbud. The gallery hosts exhibits by well-known and budding artists, and provides a space to sell pieces from Kopriva’s personal collection. (Don’t be surprised to see a Miró on the wall!)

Since the gallery’s opening, Kopriva has embarked on eight public art projects in Houston. The head-turning nature of these sculptures is only part of the aim behind Kopriva’s work as a curator. He sees public art’s benefits as all-encompassing.

“To me, [public art] is good for the soul and for the mind,” Kopriva mused. “It creates a sense of community, is a huge economic benefit for that community, and [gives] the community a sense of pride.”

He compared changes in the Heights to the evolution of neighborhoods such as Greenwich Village in Manhattan. Twenty to 25 years ago, Kopriva said, the Heights was an inexpensive  place for artists to move in and set up shop.

As the arts flourished, people flocked to live in the area that now sees million-dollar price tags on its properties.

“People follow the artists,” Kopriva said. “I think it has something to do with culture. It drives property values up. Museums, galleries, and public art always increase the value of properties.”

For his installations, Kopriva sends out a call for artists to submit proposals for the display of their sculptures. Rather than set a theme for an exhibit, he looks for art that is appealing to the public, can be engineered safely, and will bring a smile to people’s faces.

Artists like sculptor Roger Columbik, who contributed to the Long Point Drive project, have jumped at the opportunity to work with Kopriva.

“I have great trust in Gus’ judgment,” Columbik said. “He’s so engaged with the Houston community and [has created] a vibrant, visual scene and culture of the city for so many years.”

Columbik shares Kopriva’s sentiments about what public art can do for a community. Born and raised in Chicago, Columbik grew up in an environment where art was woven into daily life.

“You literally would say back then on your corded telephone, ‘Hey, let’s meet for lunch at the Picasso,’” Columbik recalled. “Everyone knows what you’re talking about with the giant Chicago Picasso sculpture.”

He said the marriage of sculpture and public spaces has been a part of his life since. His own piece on Long Point—a metal boat with golden prows entitled “Enguri River Dreams”— provided him with an interesting place to set up his work and create a dialogue for the community.

Columbik noted the economic disparities among various sections of Long Point and said the placement of public art can help shrink them.

“[In Spring Branch], you go from areas that are in more difficult economic circumstances to walking two blocks [where] you’ve got very fancy townhomes,” Columbik said. “Artists and cultural directors like us have a contributing role to play in trying to bring equity through visual culture in all neighborhoods of the city.”

Citing street improvements and redone storefronts, Kopriva has seen Spring Branch evolve even since he began his artistic endeavors there in early 2020.

“It’s a slow process,” Kopriva said. “But Spring Branch is an up and coming neighborhood and a great place to invest. I think more and more folks will be living in it.” 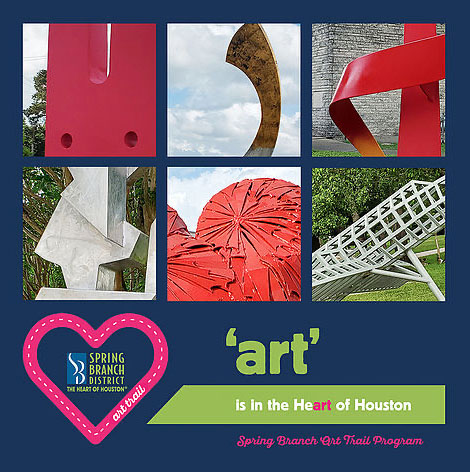 As for the location of his next big art project, Kopriva has his sights set on Broadway Street near Hobby Airport in the Hobby Area Management District — an area that he says is experiencing its own revitalization.

Kopriva said the street traffic in a day leads to more exposure for the pieces than months-long exhibits in a gallery.

While his two Peruvian hairless dogs roved the inside of Redbud Gallery to melodic music in a foreign language, Kopriva reflected on what Houston needs to become a global art center.

“Thinking back on my time in Berlin or seeing New York, there’s sculptures in various places,” Kopriva said. “But it’s not on an annual, coordinated and organized basis like we’re doing to spread [sculpture] throughout Houston.”

“We have no international art festival to bring visitors here for the arts,” Kopriva said, and no iconic installation that defines the city like the Brandenburg Gate does for Berlin, the Eiffel Tower for Paris or monuments for Washington, D.C.

“We have the [Gulf] Coast,” Kopriva stated. “Now we need to conquer the world.”