Since taking over as superintendent of the Spring Branch Independent School District on July 1, veteran educator Dr. Scott Muri has spent countless hours in the district meeting with students and parents, teachers and trustees, and bus drivers and cafeteria workers—around 3,000 people in total, he estimated. On October 23rd he discussed his findings at a joint meeting of the SBISD Partners in Education (PIE) and Volunteer Advisory Board (VAB), highlighting both the district’s strengths and weaknesses, and charting a path 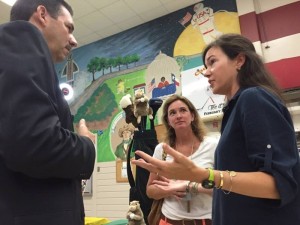 Again and again on his listening tour, Muri said, he heard about the strong Spring Branch community and the district’s devoted teachers and staff—two elements that are essential to any successful school district. “Go into any Spring Branch school, and you’ll find lot of kids who are having a fantastic experience,” he reported. “Unfortunately, you’ll also find some students that aren’t having a fantastic experience every day—and that needs to change.”  He then quoted an observation by American engineer Dr. W. Edwards Deming: “Every system is perfectly designed to achieve exactly the results it gets.”

“So if we’re designed to get the results we’re getting, and we have children who aren’t getting a great experience every day, then we need to do something about that,” Muri said. He noted that test scores across the district have been mostly flat for the past three years, and in some areas have fallen. “Our academic levels are not where they should be anyway, but for them not to have improved over the past three years is a problem,” he said. “We’re a system that believes in constantly improving, yet we haven’t demonstrated that improvement.”

Another challenge was the high number of English Language Learners in the district. Last year, almost a third of the district’s 34,857 students were non-native English speakers. Some were born abroad, while others grew up in America in families where English is not the first language. Academic achievement for these students lagged well behind that of native English speakers. “The performance of those kids in our system is deplorable,” Muri argued. “We must do a better job as a school district to create an environment that allows those kids to be successful.”

Looming over all of these issues is the district’s financial crunch—last year it ran a budget deficit of $9 million. Although home values are skyrocketing in the district, most of the extra revenue from property taxes goes not to the district but to the State of Texas under the current “Robin Hood” school funding plan, which is currently being challenged in court. Of the $32 million in additional revenue collected from taxpayers this year, only about $2 million will stay in the district.

Fortunately, Muri believes he has the beginning of a solution. A new law passed earlier this year by the Texas Legislature allows certain school districts to be designated “Districts of Innovation,” giving them the ability to draft their own policies rather than follow those set by the state. In September, Spring Branch became the first district in the state to begin exploring the program. A final vote on whether to join the program is expected in February or March, and, if approved, the plan would go into effect for the 2016-17 school year.

“Rather than having the State of Texas tell us how to run our schools, we get to have seven trustees tell Spring Branch how to run its schools,” Muri said. “As a superintendent, that sounds much better—to be able to talk to my bosses on a regular basis, rather than driving to Austin and talking to a bunch of people I don’t know.”