The simulators will provide immediate feedback opportunities for officers to master basic weapon fundamentals. Rather than sending officers to 17000 Aldine Westfield to the HPD Training Academy, officers from the Midwest, Northwest, South Gessner, Southwest and Westside substations will now be able to train on-site at their own station on a rotating basis.

Like physicians or teachers or other professionals, it is vital for law enforcement to receive ongoing training. Through the new Laser Shot equipment, officers will be trained to respond to a variety of situations. The equipment has some “scenarios” to choose from, but Commander Bellamy and his officers from South Gessner will also videotape new scenarios to add to the training program. 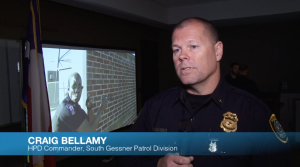 Rino Cassinelli, SBMD board member and chair of the Public Safety Committee, said his committee is the “catalyst to keep a consistent focus on safety in our district.”

Over the years, Cassinelli said, the committee has learned to pivot with the changing needs of the community, which have evolved as the district has grown.

“What we focused on 10 years ago is totally different then what we are doing today,” Cassinelli said. “It’s loosely modeled on the Weed and Seed Program. We first weed out the bad, then we start seeding the good.”

Along those lines, Cassinelli said the district is doing more seeding these days than weeding. “But just like a yard,” he said, “if you don’t watch and control the weeds they will come back.”

And so the SBMD Public Safety Committee continues to promote various safety initiatives throughout the District, including contracting with SEAL Security Solutions, coordinating nuisance abatement with the Harris County District Attorney, reporting graffiti abatement throughout the district, and processing requests for mobile cameras.

Supporting the training of officers within the Houston Police Department is also a way to promote safety within the District.

Bellamy said the purchase of the system will address a number of training challenges, including staffing shortages, the distance to the Academy for training, lack of advanced marksmanship training and the need to sustain officers’ weapons proficiency.

Commanders have little budget for training. Once an officer leaves the training Academy, it could be several years before they receive additional training. Chairman Cassinelli recommended the funding request to the Spring Branch District Public Safety Committee. It was then approved by the full board in December.