Three years after unveiling a 2015-2030 Comprehensive Plan, the Spring Branch Management District is making progress in the goal to promote economic development and enhance quality of life in Spring Branch.

Following its 15-year “blueprint for action,” the district — working with landscape architecture firm SWA Group — has plans for pilot projects in the reimagining of Long Point Road, has surveyed residents and stakeholders on their vision for Haden Park and is preparing for construction of a preliminary two-mile segment of the CenterPoint Trail.

Long Point Road, which runs for just over five miles from Conrad Sauer Drive in the west to Hempstead Road in the east, has historically been Spring Branch’s main commercial artery. In recent decades, however, Long Point has languished.

The Spring Branch Management District received a grant from the Houston-Galveston Area Council to conduct a Livable Centers study to facilitate improvements along Long Point. The goal of this study is to identify areas to improve multimodal mobility (pedestrian, cyclist, and vehicular traffic), increase walkability and promote business development and economic growth.

So far the District, in cooperation with SWA Group, has held two community meetings and conducted two surveys on the Reimagining of Long Point Road. A third and final community meeting is scheduled for May 15.

The most recent survey focused on mobility issues. Nearly 90 percent of respondents said they do not walk, bike or take the bus along Long Point Road because they do not feel comfortable doing so.

If made more safe and attractive, however, 75 percent of respondents said they would frequently or occasionally walk, as opposed to drive, on Long Point Road.

Ninety percent of respondents to the survey said they would support testing a three-lane road configuration to see the impact on traffic volume and congestion. “If proven viable,” Robinson said, “that would free up space to implement a better pedestrian realm of trees, benches, wide sidewalks and bike facilities.”

Robinson said plans are in the works to conduct two pilot projects this fall testing the three-lane configuration along with enhanced landscaping. The proposed locations for the pilot projects include from Pech Road to Pine Chase Drive and from Conrad Sauer Drive to Bunker Hill Road. There will be ongoing discussions with all those affected before the pilot projects are implemented. 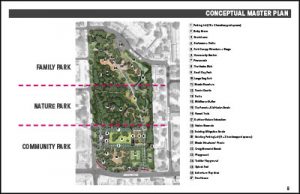 SWA Group has come up with a conceptual plan for Haden Park with three parks in one: a community park, a nature park, and a family park.

In early 2018, SBMD and SWA surveyed residents, business owners, and other community members on how they use Haden Park. The general consensus was that most people do not currently use Haden Park. Nearly 70 percent of respondents said they didn’t feel safe. Others said it wasn’t easy to get to the park, there was a lack of things to do and it wasn’t beautiful.

As major components of the proposed design take into account factors such as safety, adding walking and jogging trails, enhancing the aesthetics and providing playgrounds and other activity areas, “this really validates the design that we came up with,” said Robinson.

More than 92 percent of respondents said that, if improvements are made, they would use Haden Park. The District is continuing to review and revise the plans for Haden Park, taking into account responses to the survey.

The District hopes to start construction within the year on a two-mile segment of trail extending an existing trail that terminates at Northbrook High School. This trail, if constructed, would extend east connecting Buffalo Creek Elementary School, St. Jerome Catholic School and Edgewood Elementary School.

“An agreement between the city of Houston and CenterPoint Energy allows for construction of trails within CenterPoint’s easement. The District is aspiring to create a Hike-and-Bike Trail connecting the Addicks Reservoir to White Oak Bayou,” said Spring Branch Executive Director David Hawes.

“This trail is part of a bigger plan involving numerous agencies and government groups hoping to connect the entire city through hike-and-bike trails. The goal is to increase the number of cyclists on trails and decrease the number of cars on Houston roadways. One of the toughest design challenges for the Spring Branch District is how to circumvent Beltway 8 at the eastern edge of the district,” said Hawes.

Another major focus of the Comprehensive Plan involves drainage. The District is conducting studies to identify areas of flooding concern and working on designs to mitigate the areas of chronic flooding.

The Spring Branch Management District Comprehensive Planning Committee meets every 2nd Wednesday at the District offices [9610 Long Point, Suite 130] from 9 a.m. to 10 a.m. All are welcome.