Tucked away in a tree-lined community in Spring Branch ISD is The Guthrie Center, an innovative learning center that blows away the old idea of what a vocation-technical school is.

The brainchild of Harold D. Guthrie, who served as superintendent of Spring Branch schools for 16 years, the Career and Technical Education (CTE) program is a model for workforce development nationwide.

“With the advancement of new technology skills occurring in many jobs, today’s CTE program encompasses many careers, including emerging skills like cyber-security and advanced engineering,” said Christina Rice-Imumwen, the school district’s CTE director.

“As a result, CTE graduates who complete a sequence of courses in their chosen program of study are prepared to land great jobs in high-demand careers that pay well,” she said. “Those who choose to go to college can leverage their CTE experience as a competitive advantage.”

The center now provides elective courses to about 1,250 students, from 9th to 12th grades, who fulfill core academic requirements at other campuses.

A key component of the center’s success is its focus on skilled trades and innovative careers, offering 15 diverse program areas. The campus began with cosmetology, automotive, welding, HVAC and printing. There was also a computer programming class, a TV studio and more. Students attended for a half day before or after taking their core classes at their high school.

The center offers a wide range of programs from architectural design and criminal justice/law enforcement, to culinary arts, cosmetology and 3D animation game design. The center has other innovations that set it apart from similar schools, said Principal Joe Kolenda.

“Nearly all Guthrie teachers come from industry, so they provide a direct link to the career they represent,” he said. “Most new programs added over the past 25 years grew organically from existing programs. This really gave ownership of the programs to the teachers who invested a lot of their time and talent to develop curriculum.”

Also, the center’s 28 instructors have the autonomy to set their programs up the way they see fit to best represent industry, Kolenda said.

“This can be big things like the custom-designed drafting stations in architecture and architectural library, or less obvious but important things like dark walls and indirect light in the animation rooms,” he said.

In essence, Kolenda said, “We approach running the campus more like a junior college where students can congregate and work together in a variety of areas. We believe that students will rise to the high level that is expected both academically and behaviorally.” 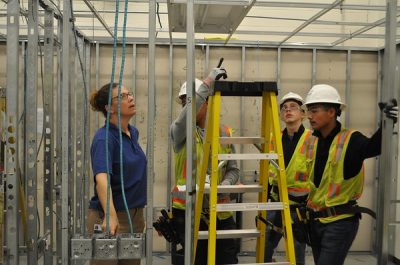 One of the center’s many success stories is Catherine Harrison, who took three years of architectural design at The Guthrie Center and became certified in the use of design software. She went on to earn a bachelor of architecture degree at the University of Houston and is an architecture project specialist at Dallas-based Corgan Architects.

“I confirmed my passion for architecture when I started taking classes at Guthrie Center,” Harrison said in an interview with VoyageHouston. She added, “I was given access to materials that could not have been accessible in a normal school such as a 3D printer, a laser cutter, and computers with AutoCAD, Revit, Google Sketchup, and other computer drafting applications used by professional architects.”

While Guthrie Center programming is strong, its facility is 50 years old. Last month, SBISD trustees unanimously voted to call a $381.6 million bond election to be placed on the May 7, 2022, ballot. The proposed bond includes funds to replace The Guthrie Center with a new facility with industry-standard learning environments that could serve more students with expanded course offerings to better prepare them for jobs of the future.