They had to pull out extra tables and chairs for the crowd that gathered at Trini Mendenhall Community Center in the Spring Branch District for coffee with Houston City Council Member Brenda Stardig on Tuesday, July 24. 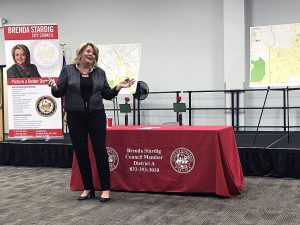 Stardig, who represents District A, talked about everything from transitional housing for parolees to road projects to high-speed rail to an August bond and November elections. She even discussed the best doughnuts in Spring Branch. (Max Donuts was chosen by Houston Police Chief Art Acevedo for Tuesday’s coffee, she said. He was in her office for a meeting when her staff did a taste test.)

Victor Alvarez, board member for the Spring Branch Management District, told the group that “reimagining Long Point is on the way.” Started three years ago with a grant from the Houston-Galveston Area Council to conduct a Livable Centers study to facilitate improvements along Long Point Road, the SBMD has completed its public meetings and surveys and is moving forward with plans to improve mobility, increase walkability and promote business development and economic growth along Long Point, Alvarez said.

Stardig also mentioned the SBMD when discussing the Gessner Road project from Long Point to Neuens, which provided for the design and construction of a six-lane divided concrete roadway with storm drainage, curbs, driveways, traffic control, and necessary underground utilities. The project isn’t done yet, Stardig said, as the SBMD will be installing new lighting — and it will be aesthetically pleasing. “We like pretty,” she said. 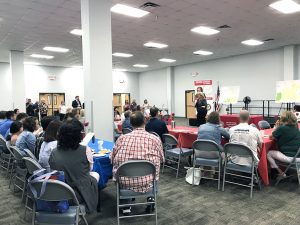 In reminding those present that there will be a $2.5 billion flood infrastructure bond before voters on Aug. 25, the one-year anniversary of Hurricane Harvey, Stardig thanked volunteers who came to the aid of residents within District A and set up a shelter at the Trini Mendenhall Center. The room where her constituents gathered for coffee Tuesday was filled with cots after the hurricane. If passed, the bond would be the largest local investment in flood mitigation since the storm flooded 154,000 homes in Harris County. Stardig encouraged everyone to go to www.hcfcd.org to learn more and to find out about upcoming public meetings on the bond.

In addition, Stardig suggested residents visit www.harrisvotes.org to “do their homework” and view a sample ballot before November’s elections.

As far as a high-speed rail project between Dallas and Houston, with the line terminating in District A either at Northwest Mall or near it, Stardig said a lot of details are up in the air. “Everything is subject to change,” she said.

One resident quipped: “I’d like to be alive to ride in it.” Stardig said the rail will most definitely not be ready before she leaves office in about 1 1/2 years. While the high-speed rail will create quite a bit of traffic, she also said it will also create jobs.

Stardig praised those present at the meeting for taking the time to attend saying: “Because we care, that’s what makes a difference in the community.”

The coffee discussion started with Stardig bringing up the recent arrest of suspected serial killer, Jose Rodriguez, who lived in a halfway house in Harris County. The type of transitional housing where Rodriguez was living “would not be tolerated in Spring Branch,” Stardig said. 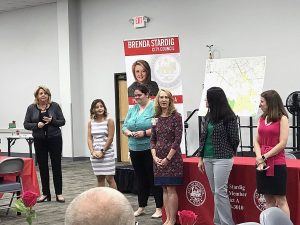 As of March, Stardig said, transitional housing must be registered and inspected. A list of locations for transitional housing in District A can be viewed at https://www.houstonpermittingcenter.org/residentialfacilities. If residents see something suspicious that they believe is not properly registered and/or inspected, Stardig said they should call 311 and call her office.

“We don’t want them to go back to jail,” Stardig said. “But we also want to make sure they are good neighbors.”

Stardig reiterated that residents should not hesitate to call her office if they have concerns about anything in the district. “You are our eyes and ears,” she said. “We’ve got a great community because we communicate.”

The next coffee with Council Member Stardig will be held the morning of Oct. 4 at White Oaks Conference Center. In the meantime, residents may reach Stardig’s office at 832-393-3010 or by e-mail at districta@houstontx.gov.