In 1956, Kathleen Awty, a kindergarten teacher at St. Stephens Episcopal School, decided to start her own preschool. She rented office space at the corner of San Felipe and Post Oak, and recruited four young girls to become members of her very first class of students. Over the next two decades she hired more teachers, introduced more grades, and attracted more students to join her educational experiment. By the time 22-year-old Rice graduate Sam Waugh was hired to teach third grade in 1977, the Awty School had become the choice of Houston’s elite families. 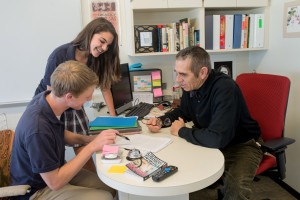 the building was a dump, honestly, but what was going on within the walls was enough to draw kids who could have been at any school in the city.”

Waugh arrived just in time to witness the biggest transformation in the history of the school. In 1978, the school merged with La Mission Laïque Française, an organization that helped with the education of expatriate French children. Faced with an influx of native French-speaking students, the Awty school developed an English as a Second Language (ESL) curriculum. That curriculum in turn attracted expats from other countries—the Netherlands, Germany, India, China.

“Nobody really recognized how international Houston had become,” said Waugh, who’s now been at Awty for 39 years, and is currently the head of its upper school. “We opened the ESL program, and suddenly we were just inundated with applications.” To cope with the influx of students, Awty moved from the Galleria to a new 15-acre campus at the corner of 610 and I-10, and changed its name to the Awty International School. It adopted the IB curriculum, and began offering immersion courses in French and Spanish for preschoolers and elementary school students. 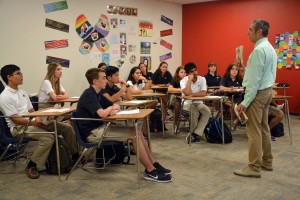 Although Awty herself died in 1996, the school that bears her name continues to prosper. With an enrollment around 1,550, it’s now the largest private school in Houston, and the second largest international school in the United States, after the United Nations International School in New York. Forty percent of the student body is American and thirty percent is French, with the remaining thirty percent comprising over 50 other nationalities. “One of my best friends is from Holland, and another is from England,” said high school senior Sydney Arceneaux, the president of Awty’s student council and lifelong Awty student. As a result of the school’s rigorous immersion program, she’s fluent in Spanish, and can speak some Mandarin as well. (All students are required to take a second language—the school offers 14, including Arabic, Farsi, Russian, and Norwegian—in addition to English.)

“I like to say that I’m both Texan and international at the same time,” Arceneaux said. “I just feel like I have such an international perspective. And in this day and age I think that gives me an advantage.”