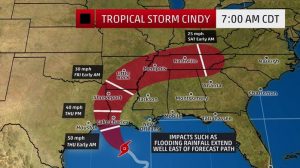 Since June 1st was the beginning of hurricane season, we have not had to wait long for Tropical Storm Cindy to develop in the Gulf of Mexico. Currently, Cindy has sustained winds of 60 mph and is located in the northwestern Gulf with a projected landfall somewhere between Galveston, Texas and the Louisiana-Texas state line. Widespread heavy with flooding potential is the greatest threat with a 40% chance of isolated tornadoes from eastern Texas through the panhandle of Florida along the gulf coast. Some areas along the gulf coast from New Orleans to Pensacola have already received 4” to 7” of rain. An additional 4” to 8” inches of rain is possible along with winds gusting 30 to 45 mph in the Tropical Storm Warning area from Houston to Pensacola.

The latest storm projections show that heavy thunderstorms are developing around Cindy’s center of circulation, which increases the flood threat from Houston, Beaumont, Lake Charles to Shreveport eastward for later today through Thursday. This is significant since Cindy has been torn apart by wind shear and shown considerable disorganization. Therefore, it is important to be prepared as the storm track and impact could change! I have attached safety checklists for preparing for tropical storms and flooding and then what to do if you return to your home and it has experienced storm damage. Please feel free to share this with your employees, family and friends.

The American Red Cross is already pre-deploying resources, supplies and equipment to the areas being affected and/or forecast in the storm path. Shelters are on standby in southeast Texas and points eastward, while some shelters are already operating in Gulfport and Pascagoula, Mississippi. The Red Cross will always be there in times of need. Please stay safe and consider how you may be able to support the American Red Cross. 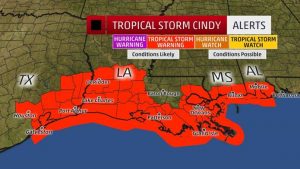 Tropical Storm Cindy is maintaining its strength in the central Gulf of Mexico, and is expected to bring potentially life-threatening flooding to parts of the Gulf Coast through late this week. Gusty winds, rip currents and isolated tornadoes are also expected. Moisture and energy from Cindy will also spread north and east ahead of a cold front Thursday to Friday, which will result in heavy rain and possible flooding from the South to as far north as the Ohio Valley. At least 17 million people are under a tropical storm warning from San Luis Pass, Texas, to the Alabama-Florida border. American Red Cross disaster workers across impacted areas are readying supplies, shelter locations and staffing resources in anticipation of the storm.

Texas: Red Cross disaster workers are closely monitoring the storm system and preparing staffing and material resources. Rainfall amounts of 3-5 inches with isolated maximum amounts of 6 inches can be expected in southeast portions of the state through Thursday.

Louisiana: Red Cross disaster workers are closely monitoring the storm system, and standing by to assist with sheltering and feeding resources throughout at-risk areas.

Mississippi: Red Cross disaster workers are preparing for possible flooding and any other complications related to the tropical storm. Heavy rains have already impacted coastal areas. On Tuesday the Red Cross operated two shelters to provide a safe place to stay for impacted residents overnight.

Georgia: Red Cross disaster workers are bracing for impact related to Tropical Storm Cindy, while also responding to several damaging flooding events (listed below). On Tuesday night the Red Cross operated one shelter which provided a safe place to stay for 13 people overnight.

Florida: Red Cross disasters teams are closely monitoring the storm system and are ready to provide sheltering and feeding assistance as needed. Tropical Storm Cindy is expected to produce total rain accumulations of 6-9 inches with isolated maximum amounts of 12 inches in the Panhandle.

Tennessee: Red Cross disaster workers are closely monitoring the storm system’s trajectory and are prepared to respond with sheltering, relief supplies and feeding when it is expected to impact the region later this week.