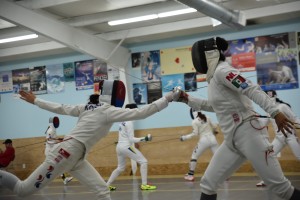 On a recent weekday afternoon at Alliance Fencing Academy in Spring Branch, two young men wearing black masks and white protective gear jousted with epee blades under the watchful eye of a coach. Cords attached to the fencers led to the electronic scoring machines used to track hits.

Only a few weeks earlier, this had been the training site of the U.S. women’s epee team, which was currently competing at the Rio Olympics. Founded by Russian-born fencing coach Andrey Geva in 2004 in Conroe, the Alliance Fencing Academy is now one of the largest such clubs in the United States; a place where fencers from around the world come to train. Sixteen of the club’s fencers are members of the American and British national teams, and 29 have won national championships at competitions in the U.S.

After competing and coaching in Russia and Israel, Geva moved to Houston in 1999 to coach at the Bayou City Fencing Academy. In 2004 he opened his own club, the Alliance Fencing Academy, which rented a small space in a strip center near The Woodlands. As the club grew, Geva expanded into larger and larger spaces, eventually purchasing his own studio in Conroe. Last year he opened the Spring Branch location, a fully-equipped gym on Cedar Post Lane with 18 competition-level fencing strips. 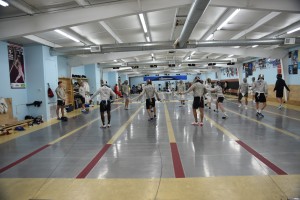 Today, the Academy has about 300 members, and offers group and individual classes in fencing, as well as a summer camp. Geva himself is the U.S. women’s epee national team coach, and serves as the personal coach to two of this year’s Olympians, Houston sisters Courtney and Kelley Hurley. Although they failed to medal this year, the Hurley sisters were members of the bronze-medal U.S. epee team at the 2012 London Olympics.

Speaking by Skype from Rio, Geva said he’s been pleased by his club’s popularity. “Houston is one of the most diverse cities in the United States. So you have a lot of people with European backgrounds, and they’re familiar with the sport,” he said. “And our clients are also the kind of people who don’t want to see their kids playing baseball, basketball, or football, because they think it’s too wild and dangerous.”

Another factor that draws parents to fencing is the potential for their children to win college athletic scholarships. “All the Ivy League schools have fencing teams, as do most of the top universities,” Geva noted. “For parents, this is a way to get their son or daughter into Harvard or Princeton.”

Geva said that fencing is as much about the mind as the body. “Many of our clients are doctors, engineers, and lawyers who are looking for a more sophisticated sport; something that is not only physical. Fencing requires a lot of strategy, a lot of thinking. You have to develop both your physical and intellectual strength.”